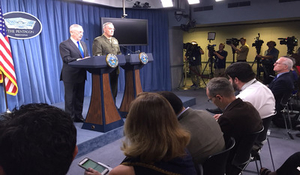 SMA hosted a speaker session presented by Mr. Robert Jones (USSOCOM J52 Donnovan Group) as a part of its SMA General Speaker Series. Mr. Jones first presented a series of thoughts for the audience’s consideration, which are posted below. He then spoke in detail about several primary theories of geography and geopolitics, including: Alfred Mahan’s “Sea Power” (1890), Halford Mackinder’s “Heartland” (1904), Nicholas Spykman’s “Rimland” (1942), and George Kennan’s “Containment” (1947). Next, Mr. Jones applied these theories to present-day China. He suggested that China’s approach in this era of great power competition is to win the “Heartland” first, then extend into the “Rimland.” China’s Belt and Road Initiative (BRI) demonstrates how it is building the infrastructure necessary for power projection across the world. Moreover, Mr. Jones stated that China believes that it does not need to fight to win; in other words, if China can capture enough markets and ports in Europe and Asia, win enough hearts and minds, and gain enough influence, power and confidence will shift from the US to China. Therefore, US decision makers must think beyond traditional war-focused theories and ask themselves, “How do we win this influence campaign? How do we posture ourselves to ensure that global confidence doesn’t shift?” Mr. Jones then spoke about how climate change may affect geopolitics and the transfer of power in this era of great power competition. He stated that sea lanes are likely to open up in the northern Arctic due to global warming, which would provide short, convenient maritime passages for China and Russia to conduct trade. He also suggested that the China-Russia relationship is likely to strengthen as a result. Mr. Jones then emphasized that the US needs a more effective global narrative than “America First” to compete with China’s “Belt and Road” and that US decision makers must reassess whether they are focusing on the right aspects of great power competition. To conclude, Mr. Jones presented a series of implications for Special Operations Forces (SOF), including that they must recognize the wisdom (and vulnerabilities) of China’s combined, phased approach.