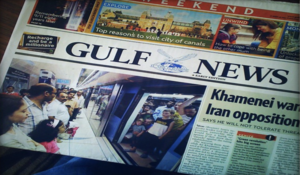 The following highlights Iranian perspectives on: geopolitical dynamics in the Middle East, the US, the global order, and the role of the Islamic Republic of Iran in the region coming from Iranian news media intended for domestic audiences. The study analyzed 134 Iranian news articles across four native Iranian news media publications from 2014 to present.

Iran is a regional power, center of the axis of resistance in the Shia Crescent, and a legitimate center of Islamic authority. Iran, and the regional power bloc it represents, is battle-tested against the US.

Presenting the US as anti-Iranian, untrustworthy, and self-interested to the point of recklessness to international community is the principle strategy Iranian media conveys to its population in order to delegitimize US claims against Iran as an aggressive international actor.

Iran media shows the US as determined to coalesce together an international faction against Iran substantial enough to force a negotiation of arms reduction and regional influence capabilities in deterioration of the Shia Crescent.

Iran sees itself as capable of withstanding conflict with the US.