Law in the Gray Zone: Lawfare and Legal Issues 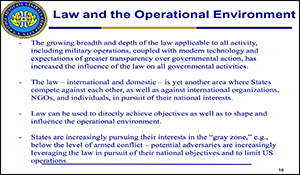 Law in the Gray Zone: Lawfare and Legal Challenges in Responding to Hybrid Threats.

CAPT Todd Huntley is currently assigned as the Deputy Assistant Judge Advocate General of the Navy for International and Operational Law. He also serves as a Special Advisor to the Deputy Assistant Secretary of Defense for Threat Reduction and Arms Control. CAPT Huntley has a B.A. in International Affairs and a J.D. from from the University of Cincinnati, as well as an M.A. in International Relations from the Fletcher School of Law and Diplomacy, Tufts University, and an LL.M. from Harvard Law School. He is also an Adjunct Professor of Law at Georgetown University Law Center where he teaches courses on counter-terrorism law and policy and legal issues related to hybrid threats.

CAPT Huntley began his military career in the Air Force serving in the Security Forces. CAPT Huntley also served as an Infantryman/TOW gunner in the Ohio Army National Guard and as a Psychological Operations Specialist in U.S. Army Reserves. He was discharged as a Staff Sergeant and commissioned into the Navy Judge Advocate General’s Student Program on 02/21/1995.

In 2002, CAPT Huntley reported to the Defense Institute of International Legal Studies (DIILS) in Newport, RI, for duty as a Country Program Manager responsible for managing international training programs for 25 different countries. While at DIILS he led three training missions to Iraq.