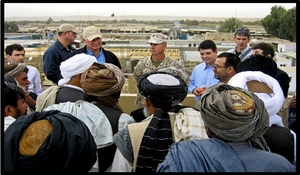 To begin, Mr. Krakar described how TRADOC’s Athena course of action analysis tool showed that both power sharing structures studied for Afghanistan (viz., power shared at the ministerial level vs. a decentralized regional government structure), resulted in increased popular support for the government and increased geographic control by the Afghan government. Mr. Liebl then addressed power sharing from a historical and cultural perspective, suggesting that while Afghans largely want an ethnically representative and pluralistic state, the primary obstacle that remains is the Taliban’s unwillingness to compromise on its prime objectives of expelling all foreigners and the reversion of governance completely into its own hands. Next, Dr. Kaltenthaler described the complex security dilemma facing Pakistan, which leaves it with little interest in or motivation to support a negotiated settlement. Mr. Logan then took a historical look at VEO fractionalization and consolidation in Afghanistan. He has found that these periods of instability are driven by three factors–organizational uncertainty, fractionalization, and consolidation–which has implications for successful counterterrorism strategies. Finally, Dr. Whiteside argued that the Islamic State of Iraq and the Levant–Khorasan Province (ISKP) is unlikely to spoil peace talks, preferring instead to spoil the government that results from a successful peace process.

Note: A small portion of the introduction is missing from the audio file due to technical difficulties.