Implications of Bad Outcomes in Yemen 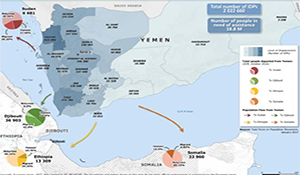 Question (R4.11): What are the implications for the U.S. and GCC countries if the Arab coalition does not succeed or achieve an acceptable outcome in Yemen?

Conflict in Yemen is now reaching the third year of its current incarnation, and despite the foreign intervention of GCC nations and several failed ceasefire attempts, the Houthi movement (Ansarullah) has continued to succeed on the battlefield. Several SMA contributors (e.g., Anonymous, Ulrichsen, & Cragin) suggest that the GCC campaign is unlikely to produce a desirable and timely military victory in Yemen. Ulrichsen and Cragin argue that rising domestic socio-economic costs of the Arab coalition campaign are outpacing a realistic timeline of a satisfactory outcome; moreover, Ulrichsen asserts that the Houthis have sufficient Iranian support and that the coalition is unable to combat “a foe that has nearly 40 years’ experience of running proxy groups throughout the Middle East.” Only one author (Styszynski) contends that an impending coalition offensive on the strategic West Coast ports of Yemen will be successful and force Houthi forces to engage in a peaceful, diplomatic end to the conflict.

Nazer notes that while the parties to the conflict generally understand what measures are necessary to end the conflict, they lack the political will to make necessary and difficult compromises. Because Saudi Arabia views a Houthi victory as an existential threat to Saudi Arabia, major concessions are unacceptable to GCC actors. Experts expect this to remain the case for the foreseeable future (Nazer, Ulrichsen, Feierstein and Ibish). However, this raises the importance of exploring realities where the Arab coalition fails to achieve the pre-2014 status-quo of a marginally stable, GCC-friendly Yemeni regime and has to grapple with some form of Houthi victory in Yemen.

Even defining what the success of the Arab coalition in Yemen looks like is not immediately clear among contributors. In large part this is due to the lack of a unified goal or vision of success among the Arab coalition. Feierstein, Ulrichsen, and Ibish all agree that a significant amount of disagreement and discord exists among coalition partners (particularly between Saudi Arabia and the UAE) as how to engage and end the Yemeni conflict; furthermore, all three contributors agree that losing the conflict exposes and exacerbates divides among the GCC. Disputes over strategy like engaging the Muslim Brotherhood as allies (Ulrichsen and Ibish) and friction over levels of coalition contributions among member states highlight the cracks in GCC unity. Considering Cragin’s timeline of the Hadi government being unable to regain “full control within the next 3-5 years,” a weakening of GCC cohesion is one of several far-reaching repercussions that extend beyond the borders of Yemen. It is worth noting that among the various implications of the Arab coalition failing to achieve a strategic victory in Yemen, there is remarkably little disagreement among the authors; rather each contributor emphasizes or discusses different consequences.

Research conducted by the PiX team foresees “no end in sight” for the Yemen conflict. However, three contributors (Anonymous, Ibish, and Styszynski) discuss the possibility of a resolution where Houthis and other factions negotiate a settlement of partition to end the conflict. Ibish contends that the Arab coalition is entertaining the notion of conceding a degree of autonomy to the Houthi rebels in the north, whereas Anonymous puts forth an end of three territories with a southern governate supported by GCC countries and neutral middle governates buffering Houthi control to the north. All three authors agree that this scenario will likely set the stage for future conflict. The historical background provided by Liebl provides the cyclical evidence for such phenomenon.

One other outcome discussed by the contributors (Ibish, Liebl and Nazer) is the transition of the Houthi movement to a Hezbollah-like organization. Nazer states that a Hezbollah-styled insurgency would be considered an unacceptable outcome for Saudi Arabia; but again, as the conflict deepens and the GCC weakens, these difficult outcomes may have to be entertained by Gulf States.

US, Iran, and GCC relationships

The most commonly discussed implications in this corpus are the adverse strain among the various relationships of actors involved in Yemen, both internal and external. Many contributors argue that the Houthi uprising and subsequent Saudi involvement has become a severe liability to the domestic legitimacy of the House of Saud (Ulrichsen, Feierstein, Ibish, and Nazer) and that continued conflict and/or defeat will significantly contribute to the unraveling of the Saudi regime. Financial expenditures coupled with the unpopularity of losing to the less funded Houthi movement reveal the lack of experience and ability of the KSA to engage in a proxy conflict.

Iran is largely perceived as being the aggravating force behind the conflict, although Liebl contends that the Iranian-Houthi relationship is little more than passive and “serendipitous” cooperation. Liebl also argues that the Houthis are not Iranian puppets but Zaydi revivalist/nativists-Yemeni nationalists. Whatever the relationship between Iran and Ansarullah, several authors argue that Iran is risking relatively little for its involvement in Yemen and even more contributors agree that Iran will gain much from an Arab coalition defeat (Ulrichsen, Liebl, Sager). Heightened tensions with Iran is a sentiment that is robustly agreed upon by every author who discusses Iran and a Houthi victory of any kind will only embolden Iranian aggression across the region (Ulrichsen, Feierstein, Ibish and Sager). Iran views Yemen as a highly valuable bargaining chip that it can afford to lose and understands that Saudi Arabia is in no position to retaliate in a meaningful way.

A deterioration of relations between Riyadh and Tehran is one of many reasons why the American interests are threatened by the Yemeni conflict. Ulrichsen, Feierstein, Ibish, Sager, Serwer and Nazer all posit that the US is significantly affected by developments in Yemen but for different reasons. Feierstein and Nazer both emphasize that the U.S. will suffer strategic setbacks with a Houthi/Iranian victory and that a lack of robust U.S. support will severely strain the US-GCC relationship. Both authors also agree that a failure on the part of the U.S. to display overt support in the conflict will lead the GCC nations and Saudi Arabia in particular to seek support elsewhere out of necessity. Another key component at play in the discussion of US interests at risk in Yemen are the counterterrorism operations that will suffer a serious setback if the GCC relationship is called into question. This risk is further heightened by the possibility of Iranian proxies operating without impunity in the Arabian Peninsula.

Serwer suggests that the US’s main interests in Yemen are counterterrorism and securing passage of trade in the surrounding Yemeni waters. Cragin also emphasizes the negative consequences of the Yemen conflict on American CT efforts and that ISIS and AQAP have and will continue to benefit the most from conflict in Yemen. Ibish also frames a narrative of outcomes that will further fuel extremism and terrorism, namely through inflaming sectarian tensions, continued humanitarian disasters and famine, and lastly a vindication of anti-Western propaganda and disdain. These consequences allow and ISIS and AQAP to further advance their agenda despite their divergent methods and goals in Yemen. Cragin articulates that ISIS and AQAP both ultimately seek to supplant the Yemeni crisis with their sponsorship of revolution and both highly value the strategic nature of basing operations in Yemen. The combined saliency of Yemen and the inherent chaos have provided both terror groups with the ideal platform to extend operations externally from Yemen.