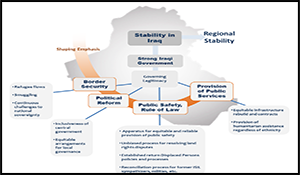 Question (LR1): What opportunities are there for USCENTCOM to shape a post-ISIL Iraq and regional security environment promoting greater stability?

The expert contributors to this paper agree on the relationship between regional security and stability in Iraq: A strong and stable Iraqi government is a fundamental component of regional stability. The key to stability in Iraq is the popular legitimacy of central and local governance. Rather than operationally specific proposals, the experts suggest shaping objectives that USCENTOCM can use to prioritize and guide planning of shaping and engagement activities in four areas most critical for enhancing stability in Iraq: Political Reform Border Security, Public Safety, and Provision of Public Services. While USCENTCOM may take the lead in assisting Iraqis with issues such as border security and public safety, it likely would play a supporting role on the political and rule of law issues discussed below.

There is (uncharacteristic) agreement among international relations scholars on the factors that determine the stability of a state: 1) the extent to which it is seen as a legitimate governing authority by its population; 2) the degree to which the state has a monopoly on the use of force within its borders (i.e., internal sovereignty); and 3) the state’s ability to secure those borders (a component of external sovereignty).

Dr.’s Belinda Bragg and Sabrina Pagano of NSI use causal loops to illustrate the stability dynamics in Iraq and why it is impossible to ameliorate security concerns without also addressing the political and social factors that determine how people view the government. They write that in Iraq, “security is intrinsically linked to perceptions of governing legitimacy and the dynamics of ethno sectarian relations.” As a consequence, political reform that forges reconciliation between Shi’a and Sunni, and accommodates Kurdish and Arab desires for greater autonomy is an unavoidable prerequisite for a stable and legitimate Iraqi state. Similarly, Dr. Dianne Maye (Embry Riddle Aeronautical University) argues that encouraging local autonomy, decentralizing power out of Baghdad and structuring the government to avoid “concentration of power in any one ethnic, political, or religious group” are prerequisites for stability in Iraq. She recommends that the USCENTCOM should support work to shape the political environment in ways that promote “strong, yet dispersed, self-governance in a federal system” in Iraq that balances central government decision-making with the desire for increased autonomy in the provinces.

Security forces and police are often the most visible reflections of the domestic intentions and capability of the state. This is especially the case in a highly volatile security environment. In Iraq it is likely that a potent, locally appropriate but nationally coordinated security apparatus will be essential for implementing and assuring stability enhancing political reforms. USCENTCOM activities that encourage the capacity and help develop popular trust in the state’s security forces regardless of ethnic or sectarian divisions will be very important. The goal should be to shape Iraqi security activities to demonstrate the professionalism, impartiality and capacity of the security apparatus. The raison d’ etre of a government is to provide service to its citizens. When it is unable or unwilling to do so, it loses the trust of its constituents. Whenever possible and whenever it can be done fairly and impartially, the Government of Iraq, rather than sectarian security forces, Coalition forces, even NGOs should provide citizens with services such as public safety and policing, justice and reconciliation, humanitarian assistance and border control. This not only improves internal security and public safety but enhances the legitimacy of the government as well. While allowing non-NGO entities to provide local services may be expedient it is erode trust in the government and thus its longer-term ability to govern. When security forces are not seen as impartial and dependable protectors of all segments of society, more credible alternative sources of security will be found. This is precisely the context that facilitated ISIL’s rapid rise in Iraq.

Bragg and Pagano (NSI) recommend two ways in which USCENTCOM might help shape the situation. First, they suggest that USCENTCOM encourage consolidation of Iraqi security forces. This does not necessarily mean forging a single, central government tightly controlled national security organization, but that there is a single authority that sets the standards for national and regionally appropriate security forces. Second, encouraging recruitment of experienced Sunni officers – many of whom will be former Ba’athists – into the highest ranks of the Iraqi Security Forces and local police may help “alleviate fears that the process of removing ISIL forces will be used as cover for reprisals against Sunni populations … and as a means of bolstering Shia political and military dominance.” Failure to incorporate Sunni in leadership roles “increases the probability that Sunni tribal elders will look to provide their own security in the future” which will expand the number of sectarian militia and the number of security forces laying claims to authority.

Finally, John Collison of USSOCOM offers suggestions for promoting security prior to , and following the liberation of Mosul from ISIL. These efforts not only would help stabilize the volatile environment around Mosul but could serve as a template or set of precedents for post battle shaping in other areas of Iraq. In coordination with USG and Coalition partners USCENTCOM can engage with key military and militia leaders to help manage post liberation expectations and quell jockeying for political position, resources and territory among the groups operating in and around Mosul. Collison (USSOCOM) highlights two issues that demand particular and immediate attention: 1) the need to establish common understanding of the policies and procedures that will be used to return displaced persons to their homes in areas on able and equitable manner; and 2) articulation of reconciliation policies and procedures that will be used for those accused as ISIL sympathizers or having committed sectarian violence (e.g., screening process, arrest criteria, who would stand trial, etc.)