Turkish Interests in Syria and Iraq 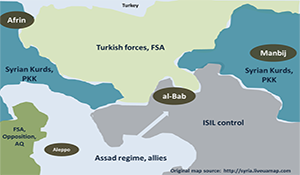 The SME contributors to this SMA Reach-back write-up argue that the recent changes in Turkish security policy (e.g., pursuit of ISIL along with the PKK; relaxing of demands for Assad’s removal; warming relations with Russia, etc.) do not necessarily indicate that Turkey’s key interests and intentions have changed. Rather, the shifts should be seen as changes in objectives or tactics that are still thoroughly consistent with Turkey’s fundamental and enduring security interests: 1) containing and ultimately eliminating Kurdish or other threats to Turkey’s internal stability; and, 2) foiling Kurdish (or others’) ambitions that threaten the integrity of Turkey’s borders. Former Principal Deputy Director of National Intelligence David Gompert (USNA, Rand) explains that recognizing Turkey’s dire concern with territorial integrity goes a long way in clarifying what may at first blush appear to be inconsistent policies regarding Assad, Syria, ISIL and even its “traditional enmity” toward Russia. Gompert expresses the message clearly: “…we can count on the Turks to do whatever it takes to prevent Kurdish states on their southern border.”

While most SMEs focused on Turkish threat perceptions and the Turkey—Kurd/PKK conflict as a key motivator of Turkey’s actions in Syria and Iraq, Portland State University Turkey scholar Dr. Birol Yesilada argues that Turkey’s security policy and actions cannot be fully understood without including President Erdogan’s personal political ambitions and domestic political considerations as critical motivators of state behavior. According to Yesilada, President Erdogan is using operations in Iraq and Syria to demonstrate his government’s strength and ability to provide security to Turks in order to advance his domestic political agenda. Erdogan’s ultimate goal is to gain the backing to change Turkey’s constitution to support establishment of his “Turkish-style Presidency” – a highly centralized, some say oligarchic or dictatorial, Islamist regime. (It is interesting to note that to date, Erdogan’s movements and plans for his “Turkish- style” leadership mirror those Vladimir Putin followed to centralize political power in Russia into his hands.)

The SME contributors to this write-up provided a number of truly expert and comprehensive essays on Turkey’s short and longer- term objectives in northern Syria and Iraq. Although not always mentioned in this context, as shown in the summary graphic, each objective has a clear and direct link to the two security internal territorial integrity) and/or Erdogan’s domestic political interest.

Defeating terrorism against the Turkish state has generally meant the PKK in Turkey and Iraq and PYD/YPG in Syria, although once ISIL fighters brought the fight into Turkey, Ankara has expanded the focus of its efforts to include the Islamic State. The question of the impact on Turkey’s security policy of Erdogan’s bid ultimately to change Turkey’s Constitution is a compelling and difficult to isolate. However, Professor Yesilada (Portland State) cites polls that show the political benefit Erdogan gains from these efforts: “91% of Turks support Erdogan’s anti-terror campaign inside the country and 78% support his military intervention in Syria and Iraq (esp. re Mosul) and 88% view his security policies favorably.”

Containing Kurdish political and territorial gains and obstructing activities that might by design or inadvertently lead to an autonomous Kurdish entity on Turkey’s border, are critical Turkish objectives in northern Syria. Many experts see Turkey’s pursuit of Operation Euphrates Shield as motivated by the desire to carve out a buffer zone in northern Syria and drive a solid wedge between Kurdish-controlled territory to the east and west to thwart emergence of a contiguous Kurdish region in northern Syria, that from its perspective would threaten both Turkey’s internal stability and potentially control over its own territory.

A number of experts noted Turkey’s push to distance itself from EU and NATO. With respect to its recently thawed relations with Russia a number of the SMEs expect that Turkey will move cautiously in its relations with Russia as it seeks to as Gompert tags it, engage in “diversified outreach” to expand its list of international partners and carve out a more independent regional role for itself. They argue that Turkey has little to gain from upsetting the US to the degree that it loses US backing.

Finally, as suggested by the opinion poll results cited above, at present President Erdogan enjoys extremely high public approval for his security policy – especially along Turkey’s border. Continuing to demonstrate the government’s ability to provide security for Turks will be a key facet of Erdogan’s overall popularity and ability to push through his preferred changes to Turkey’s democratic system.

Operation Euphrates Shield began with the liberation of Jarabulus in August 2016. In November Turkish forces and allied rebel groups launched the assault to remove ISIL from al-Bab and have been bogged down there since.

Most contributors to this report see Turkey’s mid-range intentions in al-Bab as two-fold: to defeat ISIL and push it away from the Turkish border, and to drive a pro-Turkey wedge between Kurdish-controlled areas in northern Syria containing the PKK and PYD and strengthening Turkey’s buffer zone in north Syria. A number of the SMEs make the case that one of Turkey’s mid-term objectives in conducting Euphrates Shield is to diminish the prestige the YPG has gained as the US/Coalition’s “go-to” fighters in the area. Specifically, Turkey gains both domestically and internationally if its own Syrian rebel proxies can liberate al-Bab – the last ISIL stronghold in northern Syria — and perhaps help in Raqqah rather than cede those opportunities to the YPG. Benedetta Berti (Institute for National Security Studies, Israel) suggests that Turkey’s objective here is to guarantee itself influence regarding the details of any post-conflict resolution arrangements in particular what happens with regards to Syria’s Kurdish population.

News reporters, commentators and the SMA SMEs continue to speculate on Turkey’s next move after liberation of al-Bab. Some experts believe that once al-Bab is liberated Turkey-backed rebels will attempt to take the city of Manbij 50 km up the M4 from the YPG forces that helped liberate that city and establish a strong buffer from Jarabulus to al-Bab to Manbij. In fact, in a January 4, speech delivered two months into the battle for al-Bab President Erdogan assured Turks that al-Bab would be retaken from ISIL shortly and after that, that Turkey was “committed to clearing other areas where the terror organizations are nesting, especially Manbij.”

However, on 27 January Erdogan appeared to recant, stating that Turkey would “finish the job” in al-Bab, but not necessarily move beyond al-Bab to other areas of Syria. There is a domestic and a regional concern here: Turkey has taken most of its Euphrates Shield casualties in the fight for al-Bab. Erdogan pronouncement also comes at a time when Syrian government forces are moving toward al-Bab from Aleppo and the southwest. The softening of Erdogan’s rhetoric likely reflects Russian influence as the forces of its two allies – themselves long-time adversaries, could come up against each other in al-Bab. One alternative is posed by Woodrow Wilson Center expert Amberin Zaman6 who is cited in news reports as doubtful that Turkish forces or Turkey-backed rebels would move on Manbij in part because of the Coalition Special Forces that he believes remain there following liberation of the city. Instead Zaman suggests that the next move in Turkey’s battle against the YPG will be against Afrin which is also in Kurdish-controlled territory, but which is less populated than Manbij or al-Bab and so should prove less difficult to secure.