US and Russia Interests in Middle East 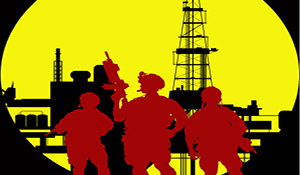 Question (R4.7): What are the respective national interests of the US and Russia in the Middle East, and what are the options for alleviating US/Russian tensions to mutual satisfaction and improved regional stability?

The geopolitical foundation of the Middle East is undergoing a fundamental shift in paradigm, with both the US and Russia adapting their national interests to fit the current reality. As part of this shift, Bogdan Belei of the Carnegie Endowment contends that US national interests in the Middle East are diminishing due to a combination of affordable and abundant domestic energy sources as well as the end of the Cold War. Yet a calm and stable Middle East remains a critical US security objective that underpins other key US interests in the region (Lamoreaux). As Blago Tashev of the Marine Corps University notes (personal communication), “the US sees itself as a status-quo power, maintaining a particular rules-based international order that was created by the US and its allies after WWII and is based on values shared by America and those allies.”

Yet many of the SMA experts note that a driving Russian interest is to restore its image as a US-peer “Great Power” in part by expanding its economic, military, and diplomatic ties to the Middle East. Specifically, Belei, Tashev, and Marten argue that Russia’s goal is to end what it sees as two decades of American unilateralism in the Middle East. Tashev argues that Russia’s moves in the Middle East should ultimately not be viewed as aimed at eliminating US presence there rather, the goal is to achieve parity with the US in terms of Russia’s influence in the region. Marten emphasizes that Russian national interests are not necessarily the same as Putin’s own interests, and that Putin has and will put his own interests first. While “the US views the Middle East in terms of global interests and a global strategy, Russia by contrast looks at the region more in terms of the political legitimacy of the Putin government (validated by external successes) and in terms of regional tactics” (Braun, personal communication). Ultimately, according to Tashev (personal communication), Russia not only differs from the US and its allies in terms of values, but also uses different strategies and policies to attain outcomes consistent with its national interests.

US versus Russian Interests in the Middle East

The collective input of the contributors identifies four categories of US national objectives in the Middle East: stability, security, economic, and democratization, with a strong emphasis on the former two.1 Lamoreaux argues that while a stable Middle East—including a non-confrontational Israel—is important to the US, a stable Europe is an even more pressing interest, largely due to economic considerations. He suggests that the best way to encourage both Israeli calm and European stability is to ensure stability in the Middle East.2 In service of this latter goal, Lamoreaux indicates that the US should continue present policy and interactions both with Saudi Arabia and with Egypt, given the current (relative) stability in those states. Similarly, Turkey must also be dealt with carefully, given the risk of destabilization to the EU posed by President Erdogan’s treatment of Syrian and Iraqi refugees (Lamoreaux).

US security interests include long-term partnerships with reliable allies within the region (Israel, Turkey, GCC, Jordan, Iraq, and Egypt) (Belei). “These relationships center on stability within the confines of effective governance, yet do not require a uniform approach either towards ‘democracy,’ nor a standardized bilateral model for US engagement—variable interests and dynamic relationships remain the hallmark of the region” (Meredith, personal communication). Within that flexible approach, firm “red line” strategies include containing Iran (Belei); counter-terrorism/counter-ISIS activities (Belei, Lamoreaux, Tashev); and preventing the development, proliferation, or use of weapons of mass destruction (Tashev).

US economic interest centers around the free flow of energy from the Middle East to the world (Tashev), including freedom of navigation, as well as maintaining sufficient capacity to monitor and potentially offset Russian naval activities in the Mediterranean (Meredith, personal communication). As Tashev discusses (personal communication), protection of strategic assets, economic, and other interests give rise to the US need to provide security over the non-littoral sea lines in the Middle East; the region is especially important given the presence of three important naval choke points—the Suez Canal, the Bab el-Mandeb Strait, and the Strait of Hormuz. Maritime traffic through these choke points has and will continue to face multiple threats, even though the US historically has maintained freedom of navigation. This freedom will decline should US capacity and willingness to provide security be reduced—thereby creating an opportunity for actors such as China or Russia to gain increased influence in the region (Tashev, personal communication). A forward naval deployment strategy to protect and control sea lines of communication (SLOCs) between Persian Gulf and Horn of Africa, as well as the greater Indian Ocean, would assist in protecting the US interest in energy security (Belei, personal communication).

Additional economic interests are “the dividend of stability and effective governance, namely the development of competitive, reliable markets for regional and global trade;4 employment growth to absorb and redirect fighting age males who would otherwise not join violent organizations; and broader tax bases for partner nations to establish capable government services and develop more legitimate social contracts” (Meredith, personal communication). Ultimately, the US views stable economic growth in the region as contributing to overall stability in the region, thus serving another core US interest (Tashev, personal communication).

Russia shares with the US one primary interest: security in the Middle East, which at present centers on counter-terrorism/counter-ISIS (Belei, Braun, Lamoreaux), thereby diminishing the threat of its brand of Islamist extremism expanding into Russia and its neighbors (Tashev). To serve this security interest, Russia is motivated to build alliances in the region, especially with friendly states like Iran, Egypt and more recently Turkey; more broadly to also establish good bilateral relations with all states (Belei, Tashev).

Lamoreaux points out that Russia’s interest in counter-terrorism may not be completely straightforward. He posits that Putin may not particularly want radical Islamic terrorism to be completely eliminated because some level of threat assists him in maintaining legitimacy and influence in the old Soviet sphere of influence (the Caucuses region and increasingly in the “Stans” as well), as the threat of terrorism increases across Central Asia. Russia’s interest in controlling terrorism is served by its continued involvement in Syria. Consistent with this claim, Marten notes that Putin’s primary goals in Syria are to support the Assad regime and eliminate Assad’s competitors; a pivot to defeating ISIS will occur after these goals have been achieved.

Russia also has economic interests in the Middle East, including expanding economic ties with the region through arms sales, nuclear technology, and the oil and gas markets (Belei, Marten, Tashev), as well as supporting energy prices by coordination with principal oil and gas producers in the Persian Gulf (Tashev).

Russia’s secondary interests in the Middle East otherwise focus on countering US and Western influence. This includes efforts to weaken the EU and West more generally, as well as a destabilized Syria, which is believed will contribute to a destabilized EU by fracturing it along multiple fronts (Lamoreaux).5 Putin also has an ongoing interest in undermining or complicating US diplomatic leadership in the Middle East and elsewhere in order to enhance domestic and regional perceptions of his strength and US weakness (Marten). Similarly, Putin is likely to use diplomatic overtures to further complicate and harm the US relationship with countries in the Middle East (Marten). Each of these actions serves Russia’s goal to regain global stature and contest US presence in the region (Serwer). Toward this goal, Russia aims to reestablish its influence in Libya, Egypt, Turkey, and Iran by filling the gaps left by the US (Serwer); Russia establishing a military presence in the Middle East will be a likely consequence of this objective (Belei).

Several contributors indicated that the prospects for US-Russia cooperation in the Middle East are relatively poor (Belei, Braun, Marten, Serwer, Tashev). Braun (personal communication) notes, “In certain key areas, the differences between Putinite Russia and the US are more than tactical or even strategic; they are fundamental and cannot be bridged.” Meredith asserts that, while global competition has been tempered somewhat by US and Russian desires to control escalation to the point of outright conflict, the mutual restraint in US-Russian relations characteristic of the Cold War has not yet fully re-emerged. “This absence of mutual restraint is in part because the Russian paradigm remains zero-sum at its core—which leads to divergent interests vis-à-vis Iran, Syria, and Turkey as core actors in either the Western or Russian sphere of influence” (Meredith, personal communication). Belei argues that contrasting US and Russian interests also lead to opposing activities in the region that are fundamentally at odds. For example, in Syria and Libya, Russia opposes factions that the US supports; whereas in Afghanistan, Russia bolsters Taliban fighters who target US forces (Belei, Marten). According to Braun and Marten, as long as Putin relies on external events for internal political legitimation, a true resolution of tensions between the US and Russia will be difficult to achieve. This is underscored by Russian investment and military operations in Syria, warming relations with Iran (Braun), and intensification of relations, including with non-state actors, in the region (Tashev). Overall, Marten argues, Putin does not have much incentive to cooperate with the US in regards to defeating ISIS, unless he can portray the West as having capitulated to him and/or the US publicly acknowledges Russia’s leadership in resolving the conflict.

A more optimistic view of the situation suggests that it is possible that the US and Russia can converge on an interest in regional stability6 (Meredith, Tashev) “in the short term—seeking to contain and eventually diminish levels of violence—while recognizing stable governance can become an area for democratic development, itself a stabilizing force over the long term” (Meredith, personal communication). Neither the US nor Russia is interested in a protracted war and thus the tension might also reach a stalemate that would force both countries to engage in a political agreement (Belei). Barring these situations, prolonged conflict—or in the worst-case scenario, direct confrontation—is possible (Belei, personal communication).

The contributors offer a wide range of recommendations for reducing tension between the US and Russia in the Middle East. These are focused primarily on Syria and Russia itself, and include: