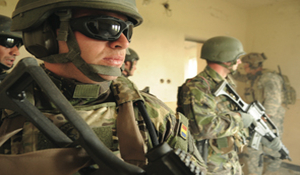 SMA hosted a speaker session presented by Dr. John DeRosa (Special Operations Command Europe (SOCEUR)), Dr. Otto Fiala (SOCEUR), and LTC (R) Gordon James (Jim) Worrall (SOCEUR) as a part of its SMA NDU Speaker Series. Dr. DeRosa began by discussing the origin of SOCEUR’s Unconventional Warfare (UW)/Resistance Seminar Series in 2014, highlighting that it was designed to create “an academic and practitioner network/forum to allow Baltic, Nordic, and other relevant partner nations to discuss, exchange, and conduct applied research and analysis on UW, resistance movements, and partisan warfare in partnership with SOCEUR in a non-classified environment.” The aim of this seminar series is to create common terminology and understanding, coordinate with other UW and resistance activities, and promote whole of government solutions. Dr. DeRosa outlined the effects of the seminar series, focusing on the written Resistance Operating Concept (ROC). The ROC is designed to inform US planning and doctrine, and it argues that a legal framework is required in order to exercise legitimate and sovereign planning within a state. Dr. DeRosa also discussed the lessons learned from the seminar series. He then defined resistance, identified its key features, and distinguished it from insurgency. He also defined UW and discussed its relationship with resistance. Dr. DeRosa also explained how resilience is part of the foundation of resistance and discussed SOCEUR’s way ahead—in the near term (~6 months), in the mid-term (6-12 months), and in the long term (12+ months). To conclude the presentation, Dr. Fiala re-emphasized the need for the establishment of a national legal framework and stated that resistance is a form of warfare—it is something that one should plan for now.