Stealth War: How China Took Over While America’s Elite Slept 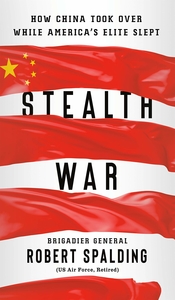 “Stealth War: How China Took Over While America’s Elite Slept“

SMA hosted a speaker session presented by Dr. Robert Spalding III, Brig Gen, USAF (Ret.) as a part of its Future of Global Competition & Conflict Speaker Series. Dr. Spalding’s brief centered around his recent book, entitled Stealth War: How China Took Over While America’s Elite Slept. To begin, he spoke about several sources that influenced his book, including the 2019 US National Security Strategy (NSS), Unrestricted Warfare, and the Tiananmen Papers. He then stated that several years ago, the Chinese Communist Party (CCP) realized that China was under attack—culturally—by the US and that China needed globalization in order to protect itself from the US’s influential ideas and principles. The CCP’s ultimate goal, Dr. Spalding stated, was to fuse the ideals of the party with Chinese society writ large so that the terms “China” and the “CCP” would become synonymous. Dr. Spalding then spoke about China’s military, diplomacy, intellectual property (IP), and infrastructure. He stated that the CCP has been able to shift the balance of power in the Indo-Pacific and effectively and efficiently create denied spaces for the US in the region. Furthermore, by deflecting attention and operating behind the scenes, the CCP is often able to stealthily achieve its goals and favorably manipulate global narratives. Dr. Spalding stated that China plans to dominate the global tech economy as well, and it plans to do so via intelligence collection from data and its domination of the 5G market. With regards to infrastructure, China is developing emerging market economies in order to gain access to raw materials and to give these nations the tools needed for digital commerce. To conclude, Dr. Spalding made a series of recommendations on how to deal with this “stealth war” in ways that align with the NSS. He stated that this effort should be focused on protecting, rebuilding, and inspiring. The US must 1) be more thorough in enforcing Chinese companies operating in the US to comply with US standards, 2) reassess its fiscal policy to effectively compete with China, 3) rebuild manufacturing centers that were lost to Chinese companies operating in the US, and 4) convince successful US business leaders who are being tempted by the Chinese economic model that the US’s is still more effective.