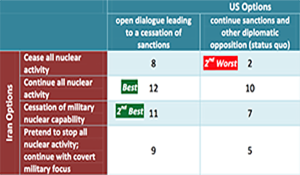 The SMA Strategic Deterrence effort is a methodological study to evaluate the appropriateness and utility of modeling and wargaming to support the analytic requirements of the Deterrence Operations Joint Operating Concept (DO JOC). The objective of the study is to determine which aspects of deterrence operations and planning can be appropriately analyzed through gaming, and which aspects can be appropriately analyzed through different forms of modeling. The project also examines the synthesis of deterrence gaming and modeling, how the results of gaming can inform deterrence modeling, and how modeling can shape deterrence gaming.

The SMA Deterrence project explored the methodologies and potential contributions of nine distinct data collection, modeling, and wargaming approaches. It addresses both their relationships to each other in support of deterrence planning, and their ability to directly support the deterrence assessment and planning process employed by U.S. Strategic Command (STRATCOM). The approaches included in the study include:

In order to achieve the program objectives, the study incorporated a limited analysis of a specific deterrence scenario. The extended open source elicitation, capability analysis, and Gallup World Poll were used as data generation methods. The causal diagramming and system dynamics model, subjective decision analysis, social network analysis, GLASS model, and regional wargame were used to analyze various aspects of the deterrence scenario. In addition, a methodology and integration study was conducted using the current SDAL practice as a baseline. This study examined the utility, costs, and means of integration of the approaches exercised in the program as well as seventeen additional data generation and modeling approaches of potential relevance to deterrence analysis and planning.

This Summary Report provides an overview of the key analytic and methodological findings of the project. Detailed descriptions and the complete reports and products of the expert extended open source elicitation, causal diagramming/system dynamics, subjective decision analysis, social network analysis, GLASS modeling, as well as the overall Methodology & Integration study are provided as appendixes to this report. The results of the wargame are contained in a separate classified report at the SECRET level.