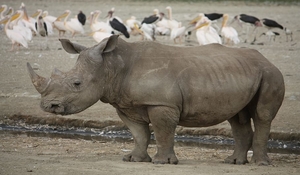 SMA hosted a speaker session presented by Mr. Christopher Ventura (National Intelligence University) as part of its SMA General Speaker Series. Mr. Ventura first discussed the origin of the term “gray rhino.” He stated that Dr. Michele Wucker coined the term “gray rhino” in 2012 as a combination of a “black swan” and the “elephant in the room.” The term describes a highly probable, high-impact event that is very likely to be ignored. In contrast, “black swans” are events that have high impact but were unpredictable or perceived as being unpredictable at the time. Mr. Ventura then identified some of the problems evident in the study of gray rhinos and outlined specific solutions and tools for managers and leaders to use when classifying and dealing with these gray rhinos. Mr. Ventura argued that many issues surrounding gray rhino theory arise from individuals’ unwillingness to put the time, resources, and manpower into exploring those problems. He stated that people who write almost every situation off as a “black swan” because it is convenient and easy to do so may be surprised in the future when the same situation reoccurs. Additionally, getting caught up in the optimism that some gray rhino situations will just disappear causes individuals to become slower to acknowledge the next gray rhino. Mr. Ventura claimed that psychology and culture is at the root of these problems, as well as the environment and pace of production and reporting. He stated that the frequency of reporting corresponds to the volume of papers being published, and when reporting is slow, that is the time in which analysts begin to tackle gray rhino issues. This is because analysts tend to prioritize current, pressing matters over more long-term, impending problems. To conclude, Mr. Ventura provided a series of solutions and a framework to avoid being fearful of tackling a gray rhino. He emphasized the benefits of using specific information that is not impeachable, the need to provide reasonable options that are possible or achievable in the current environment, the value of using language that those who you hope to influence or persuade are comfortable with, and the need to build a coalition of the willing before speaking to a senior leader. He also outlined the importance of “values-based decisions” early in the process of diagnosing a situation as a gray rhino to allow collaboration and problem solving to happen immediately. Instead of waiting for the perfect solution, Mr. Ventura stated that leaders should identify weakness they can accept and strengths that they cannot live without. By setting the standard and creating the incentive to recognize and attack gray rhinos early, resources can be better utilized, and the overall culture of making decisions and managing these issues can become more effective.

To receive Mr. Ventura’s publications, email Ms. Mariah Yager on the high side at mariah.yager@nccs.ic.gov.