The Emperor’s New Road: China and the Project of the Century 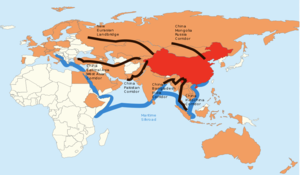 Mr. Hillman’s presentation focused on the findings presented in his new book, entitled The Emperor’s New Road. Mr. Hillman began by stating that China is not only following in the footsteps of other great powers, but it is also falling victim to their mistakes. He then addressed the comparison often made between the BRI and the Marshall plan. He explained that the Marshall plan was much smaller in terms of investment ($140 billion when adjusted for inflation, as compared to the $1 trillion in BRI investments promised by China). Moreover, the Marshall plan was a focused effort with a finite list of activities, a timeline, a set list of participating countries, and a goal of rebuilding economies that had already been developed. The BRI, on the other hand, has much broader participation and a goal of building economies that have not been developed before. Mr. Hillman stressed that those who engage in the BRI are not guaranteed benefits; in fact, despite China’s portrayal of this initiative as being win-win for both parties, investments tend to favor Chinese actors by a significant amount. This has often led participating nations to be disappointed by their involvement. Mr. Hillman used the China-Pakistan economic corridor as an example and stated that a small percentage of what has been announced has actually been completed, despite its portrayal as being the flagship of the BRI.

Part of the difficulty that China has encountered is not by mistake, according to Mr. Hillman. The BRI does not have a project criteria, nor does it encourage transparency—both of which were characteristics that China initially hoped would benefit the initiative. Xi Jinping is also reluctant to cancel projects that should be cancelled due to a fear of embarrassment, which adds to the management challenges present. Moreover, the pandemic has seriously affected 20% of BRI initiatives, but none have been cancelled, which will make it much harder for China to course correct in the coming years.

Next, Mr. Hillman discussed the way ahead for the BRI. He explained that there has been a shift in rhetoric to address the criticism surrounding the initiative; however, the actual efforts don’t seem to have changed much so far. An increasing emphasis on digital infrastructure has also emerged. Mr. Hillman used China’s collection of data at ports in Greece, as well as its construction of government buildings in Africa, as examples of its utilization of digital infrastructure. He also spoke about China’s placement of fiberoptic cables between China and Pakistan, China’s laying of undersea cables between Gwadar and Djibouti, Huawei’s “safe cities,” and China’s propagation of “new infrastructure” (e.g., the Internet of Things, 5G, smart grids, satellite-delivered internet).

To conclude, Mr. Hillman stated that this is the year of the great negotiation for the BRI. Over 100 countries are approaching the International Monetary Fund as a result of the pandemic, and with China being the largest bilateral provider, there will be implications for the concessions that China may be seeking. Furthermore, the Health Silk Road aspect of the BRI was once a footnote, but due to the pandemic, it has become more significant. Mr. Hillman stressed that it is still more of a rhetorical device rather than something that has a project footprint to substantiate, however. Finally, there have been significant developments on the US front to offer better alternatives to Chinese projects. Mr. Hillman thinks that these initiatives are promising because to many countries, China is not their first choice, but rather their last resort. Therefore, if the US presents sufficient substitutes to Chinese efforts in the future, countries will likely move away from China.