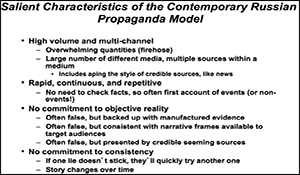 The Russian “Firehose of Falsehood” Propaganda Model Why It Might Work and Options to Counter It.

Chris has spoken, presented, taught, testified, or lectured before the House Armed Services Committee, for NATO audiences, to defense audiences in Singapore, the United Kingdom, Australia, and New Zealand, at the National Defense University, at the Naval Postgraduate School, at the Army War College, at the Naval War College, at the School of Advanced Military Studies – Army Command and General Staff College, at AETC Air Command and Staff College, at the Center for Army Analysis, at the USA/USMC COIN Center, at the Air Force Special Operations School, and at the State Department’s Foreign Service Institute, among others.