For the past several years, NSI has provided the Special Operations Command Central (SOCCENT) Commander with a variety of research and analyses focused on the Islamic State of Iraq and the Levant (ISIL). Our analyses ranges from determining whether or not ISIL is a flash-in-the-pan or a more durable movement capable of achieving its military, religious, and political goals to exploring the affects that ISIL does and does not have on the numerous conflicts and regional dynamics of the central Middle East. 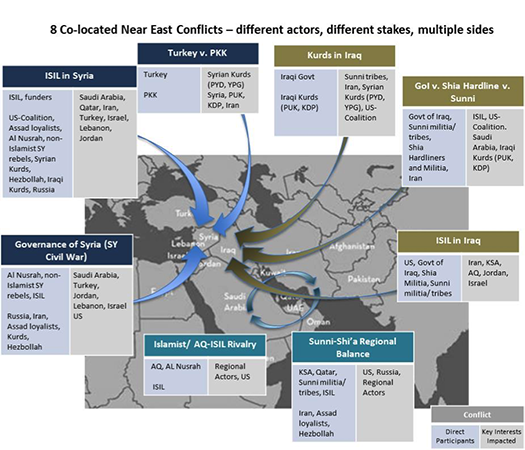 NSI explored the dynamics of the central Middle East conflict system. Specifically, we described the system and why it is critical to assess US security interests and activities in the context of the entire system rather than just the conflicts (e.g., defeat of ISIL) in which the US is most interested. We applied a decision analysis to assess regional dynamics and futures based on the alignments and conflicts among three critical drivers: actor interests, resources, and resolves. We also described the interplay of the 20-plus actors’ interests, capabilities, and resolve in the eight conflicts that comprise the system. The objective was to facilitate systematic analysis of the sources of threats to US security beyond ISIL so that we might work pro-actively, or “farther to the left,” to mitigate them.

Related to this, NSI participated in a short term proof-of-concept to evaluate neuro-cognitive maneuver engagement options in the narrative space. There were three objectives for this effort: to disrupt ISIL leadership’s ability to command and control forces; to neutralize their ability to maintain or increase moral, political, and financial support and recruit foreign fighters; and to psychologically isolate ISIL leadership from one another and their respective constituencies inside and outside of the organization. NSI conducted a thematic discourse analysis of ISIL leadership speeches as well as performed decision analysis of key regional actors and population groups to identify key actors interests, capacity and resolve, and assess how they respond to various stimuli from various actors. We also provided reach back support to a simulation control team providing analytic insights regarding actor interests, capacity, and resolve while also reaching out in real-time to subject matter experts (SMEs) through our ViTTa services to answer questions emerging from control team requirements. 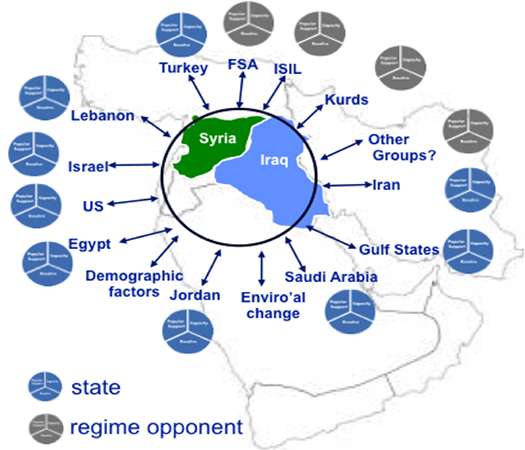 Looking Beyond ISIL: The Middle East in 2025

NSI participated in an effort focused on looking beyond ISIL and assessing what the Middle East will look like in 2025. The premise was when the dust settles and some degree of durable stability has been established in the Middle East, it will no longer look as it did prior to the start of the Syrian civil war and the rise of ISIL. Therefore, the question is what will the Middle East look like when the ISIL crisis has been resolved? The effort required innovative and comprehensive thinking and approaches to deal with the high degree of complexity and uncertainty inherent in the problem. Understanding what the Middle East looks like in the aftermath of ISIL required employing many diverse instruments, tools, and methodologies to identify and assess the horrendously complex factors and phenomenon that underlie the rise of violent Islamist fundamentalism in the region. NSI led a large group of organizations participating in the effort. We assisted our government clients with project design; development and application of an analytic framework – leveraging the Evolution & Longevity Framework developed in 2014 – to guide the discussion and integration of analytic results produced by team members; and bridged strategic level analyses with operational level realities. We also ensured the concepts, analyses, and results produced were actionable for end-users such as military planners, strategists and decision-makers. NSI also conducted a subject matter expert (SME) elicitation using our a ViTTa services to solicit international perspectives, integrate empirical and academic research, challenge assumptions, and develop a rich baseline understanding of potential futures in the Middle East.

The Appeal of ISIL

NSI supported a study at the request of SOCCENT to assess the appeal of ISIL. Specifically, the study focus was to answer the question, “What makes ISIL so magnetic, inspirational, and deeply resonant with a specific, but large, portion of the Islamic population allowing it to draw recruitment of foreign fighters, money and weapons, advocacy, general popularity, and finally support from other groups such as AQAP and Boko Haram?” This study attempted to understand the psychological, ideological, narrative, emotional, cultural, and inspirational (“intangible”) nature of ISIL given there has been no consensus on the set factors that define the appeal of ISIL to date. Utilizing techniques from our human behavior analytics, NSI developed an umbrella framework (termed the Evolution & Longevity Framework) as part of this effort to understand the appeal of ISIL that incorporated five critical elements inherent in the evolution of a revolutionary movement into a functioning government. The five elements describe the organizational attributes and conditions (appeal) requisite for a revolutionary movement (like ISIL) to evolve into a functioning government, in this case a caliphate. Evidence was solicited from each of the study participants along each of the five sets of criteria, each with its own set of observables: the strength and loyalty of ISIL’ local elite power base, ISIL capacity to control, external (state/NGO) support for ISIL ideology and activities, Umma support, and local civilian support.

Two hypotheses were tested for supporting evidence: Hypothesis 1 was ISIL is a “flash-in-the pan” (i.e., not a viable entity in the geographical areas it currently controls); Hypothesis 2 was ISIL a durable movement and/or a viable caliphate in the geographical areas it currently controls. The Evolution & Longevity Framework served as a guide for organizing and integrating the many ongoing analytic contributions from the study participants seeking to describe the nature of ISIL while providing a method for assessing the evidence that ISIL is on either a deteriorating or expanding pathway.

Sixteen organizations researched these hypotheses and presented their findings in accordance with the Evolution & Longevity Framework. The framework satisfied multiple objectives: to lay out the landscape or “schools of thought” regarding the intangibles that explain ISIL support and achievement, to guide the identification of the intangible factors that explain ISIL growth or decline, and to help distinguish those factors that relate to ISIL specifically (e.g., as the organization and the “brand”) from those that relate more broadly to a sustained militant radical Islamist ideology and movement. NSI also conducted extensive SME elicitations using our ViTTa services and generated a number of quick look reports per the client’s request. We interviewed 39 SMEs from across the globe to gain insights into the nature of ISIL’s appeal. NSI summarized the key findings, identified patterns of beliefs, and highlighted areas of convergence and divergence, all in accordance with the NSI’s analytic Evolution & Longevity Framework.