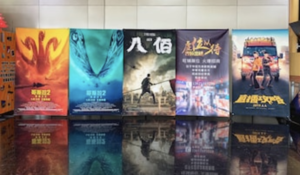 Dr. Davis began by arguing that the Chinese Communist Party (CCP) is using soft power to try to develop a new narrative to replace the post-war, American-dominated narrative. He then discussed several trends in the CCP’s use of soft power to “cancel” American culture through movies and media. Dr. Davis explained that China looks at areas such as film as part of national power, unlike the US. He contended that China is pursuing an integrated strategy where soft power strategies are meant to accompany the rise of hard power in the country’s concept of its new global role. He stated that his research focuses on China’s accumulation of soft power as a carefully cultivated strategy that has been implemented and is being executed by officials and friends of the regime, with some of the most important friends being business leaders. In his view, the CCP is trying to reshape the narrative by replacing American values with CCP-friendly values.

Dr. Davis went on to highlight the centrality of the “century of humiliation” in Chinese thought, in addition to Chinese anger at depictions of Chinese people in US culture. He stated that China wants to create a new story, new narratives, and a new set of images that they believe highlights the CCP’s accomplishment of advancing China’s placement in the global hierarchy. This new story is focused on China’s domestic audience and on feelings of national culture and national pride because the CCP wants its accomplishments to be amplified globally and then projected inward to its domestic audience. Dr. Davis stated that over the past decade, China has developed the tools and organization—in the form of both military assets and business leaders—needed to execute a campaign of global cultural re-education. Dr. Davis further stated that the target of China’s campaign is the American brand—Hollywood, in particular. He provided examples of a number of films that have portrayed China positively and/or changed content or advertising to meet Chinese censorship requirements or remove negative portrayals of China. He also discussed Chinese efforts to control distribution by acquiring various media outlets in the US, as well as other examples of self-censorship by US entities and censorship of US entities by China. Finally, Dr. Davis explained how China uses a variety of espionage techniques to acquire American technology, with the larger goal of acquiring data in order to facilitate surveillance, market research, and narrative-shaping to advance CCP power and influence. Dr. Davis concluded that in the short term, China’s narrative-reshaping efforts have faced serious setbacks, but the country committed to these efforts for the long haul. He believes that the CCP is well-positioned to take control of the vision of the future, which raises the question of whether the US will be passive or actively respond in light of this reality.

Mr. Monroe began his portion of the brief by noting that the US focuses heavily on kinetic, big-industrial concepts of war, while China maintains a much more dynamic, psycho-physical campaign that has narrative, storytelling, and technology infrastructure components. Mr. Monroe noted that the primary targets for China’s initiatives are in the 17-24 age range. He stated that the National Center for Soft Power Strategies (NCSPS) is concerned that the soft power war between the US and China has become a political war, in which China’s actions are being portrayed in both a positive and untrue light (e.g., its use of Uighur concentration camps is shielded). Mr. Monroe also noted that NCSPS is focused on cultural management of soft power. He then underscored the contrast between China’s positive messaging of its own actions and its negative portrayals of the US. He also highlighted his concern regarding how Chinese messaging in media (e.g., Pacific Rim) has advanced Marxist-Leninist ideals, which contains implications for extremist movements in the US. Mr. Monroe further noted that the CCP’s methods for accessing US technology heavily emphasize regime-friendly business leaders who are not truly independent from the government.

Mr. Monroe went on to present a series of active ways in which the US can respond to Chinese soft power. For example, the US Information Agency was created in the 1950s with a huge budget, but it was disbanded in 1999. This ultimately helped China recognize that the US had minimal assets to defend itself against soft power information strategies. Mr. Monroe also referenced Walt Disney’s role in supporting US information warfare during WWII through his creation of the film Victory Through Air Power in 1943. He questioned why we are not similarly pursuing the promotion of democracy and freedom using present-day technologies, formats, and means of distribution. Mr. Monroe offered several ideas for a large, multinational coalition of freedom-loving nations engaging in information sharing to fight against authoritarianism as well. Mr. Monroe concluded by discussing his collaboration with Dr. Davis and others to highlight the potential role of art in the fight against the CCP, and he contended that it is time to stop studying the problem and to start doing something about it.