NSI participated in two major efforts focused on providing the International Security Assistance Force (ISAF) Commander with a rich contextual understanding of forces for conflict and for peace in the Pakistan and Afghanistan areas of operation.

NSI led the Pakistan and Afghanistan (PAKAF) rich contextual understanding (RCU) II effort for the International Security Assistance Force (ISAF) Commander. The project goal was to provide the ISAF Commander with a “rich contextual understanding” of forces for conflict and for peace in the PAKAF area of operation. NSI utilized numerous techniques from our human behavior analytics to plan, manage, and execute multiple social science modeling efforts conducted at the provincial level, for prioritized areas, and at the district or individual actor levels. We also conducted multidisciplinary, multi-approach analyses and reporting responses to questions posed by the CJ-2 ISAF and the ISAF Joint Command (IJC) in three critical operational areas: means of marginalizing the insurgency, ways to better engage and protect the population, and enhancing governance in Afghanistan. NSI also conducted a social network analysis (SNA) of Paktika province and a longitudinal analysis of Afghanistan survey data for ISAF as part of the PAKAF Rich Contextual Understanding effort. NSI also provided knowledge management services in the development, population, and maintenance of a community of interest and a knowledge sharing and collaboration platforms for the SMA effort. The community includes broad membership across DoD, interagency, industry, and academia. The knowledge management platform provides a comprehensive source of research and analysis to enable commanders to develop a deeper understanding of the cultural context of the populations within which they operate. 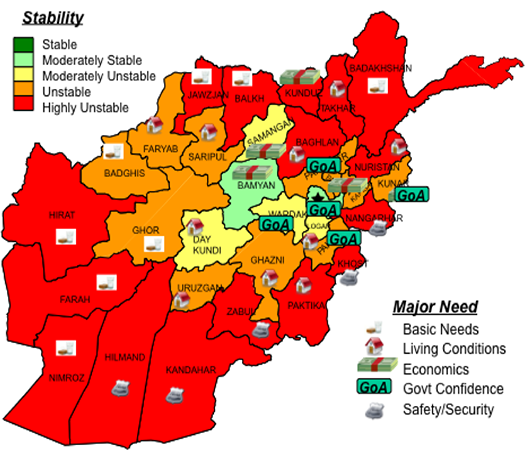 NSI led the PAKAF RCU I project, which focused on providing the ISAF Commander with a RCU in the Pakistan-Afghanistan (PAKAF) area of responsibility. NSI’s role spanned all components, including overall program management and leadership, research, writing and production of the responses, reports, and assessments, and development support of the RCU-Vis software. We utilized several techniques from our human behavior analytics to integrate the robust expertise available in the continental US with in-theatre analytical efforts in order to produce a richer view of the Pakistan-Afghanistan strategic and operational environment. The overall PAKAF I program focused on 16 districts in three provinces in Afghanistan (Kunduz, Paktika, and Helmand) and 10 districts in Pakistan. It consisted of six interrelated components: 1) development and population of classified and unclassified, annotated, and searchable data libraries; 2) “all-district” data generation and multidisciplinary, multi-method assessment efforts; 3) a “deep dive” on Helmand province; 4) response to “40 Questions” directed by the ISAF G2; 5) production of “rich contextual” materials; and 6) development of an RCU-Vis software application containing easily accessible and searchable information on the 16 districts in Afghanistan and Pakistan.