Russia and the Expiration of the UN Arms Embargo on Iran 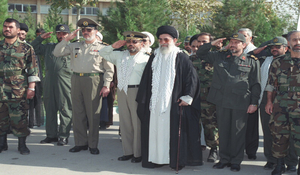 SMA hosted a speaker session presented by Dr. Mark Katz (George Mason University) as part of its SMA CENTCOM/EUCOM Speaker Series. Dr. Katz discussed UN Security Council Resolution 2231 (UNSCR 2231) in detail, which was adopted in support of the Joint Comprehensive Plan of Action (JCPOA) (i.e., the Iranian Nuclear Accord of 2015). This resolution requires approval for certain types of weapons to be sold to Iran and is considered to be an embargo. This provision is dated to expire in October 2020, and Russia has expressed its intent to sell weapons to Iran immediately after. The US withdrew from the JCPOA in 2018 but is now introducing a Security Council resolution extending this arms embargo indefinitely on the grounds that the US is an original JCPOA signatory. Dr. Katz explained that if this resolution passes, all pre-2015 sanctions on Iran will return, which is unpopular amongst Russia and China. He argued that Russia is less concerned with selling weapons to Iran, but it is motivated to isolate the US from Europe and its Middle Eastern allies. Dr. Katz then explained that the results of the upcoming US presidential election may impact Russian behavior. If President Trump is reelected, Russia will likely exchange an extension of the JCPOA arms embargo for something valuable to them, such as an extension of the New Strategic Arms Reduction Treaty (New START) due to expire in early 2021. However, if Biden is elected, Moscow may anticipate a US renewal of New START and rejoining of the JCPOA, giving Russia motivation to sell weapons to Iran before Biden is sworn in. Dr. Katz elaborated that Russia and Iran are both currently under US sanctions, so there is “not much to lose” if Russia chooses to sell and deliver weapons to Iran. On the other hand, a reason Russia may delay its selling of weapons to Iran relates to its desire to maintain good relations with itsother Middle Eastern allies, such as Israel, Saudi Arabia, and the United Arab Emirates. Iran’s inability to pay for weapons coupled with these countries’ potential agreement of compensation towards Russia could decide which countries Russia chooses to sell to. Finally, Dr. Katz claimed that Russia may exploit divisions between the US and its other allies who continue to support the JCPOA to keep the US from doing the same for countries allied with Russia, adding that if the US were to point out Russia’s unreliability as an ally, smaller Middle Eastern countries may be more willing to support US policies instead.

Note: We are aware that many government IT providers have blocked access to YouTube from government machines during the pandemic in response to bandwidth limitations. We recommend viewing the recording on YouTube from a non-government computer or listening to the audio recording below, if you are in this position.