NSI conducted a “fragmentation” analysis of Pakistan in order to determine what future path the country was on. We started with theoretical propositions about the nature of the pathways, we then tested these against twelve historical cases used to refine our pathway characterizations, and finally we applied the refined pathways to look at Pakistan from today forward. We posited four potential pathways associated with Pakistani futures – national fragmentation, extremist transformation, muddling through, or happily ever after. The general pathway descriptions we have constructed are not just applicable to Pakistan but could as easily applied to assess other countries and regions. 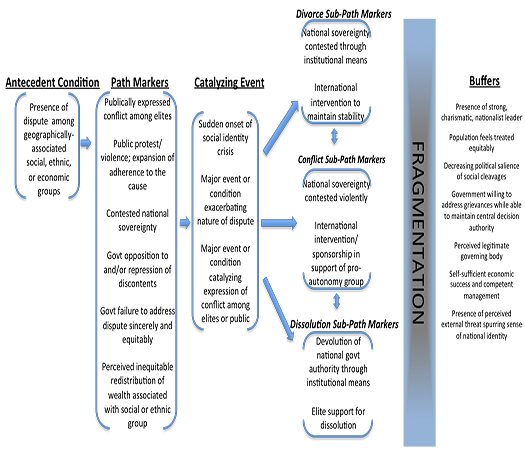 NSI conducted a “fragmentation” analysis with the focus being to answer the question what path is Pakistan on. This is an extremely difficult question to answer and leads to an answer that is too static to be reasonable or too long. This is because at any point in time we might observe in a state such as Pakistan, evidence consistent with any number of future pathways. For this reason our approach was to look at where the balance of the evidence lies—which might be the dominant path—and more crucially, which are the indications and warnings that we should be looking out for in order to understand day-to-day in Pakistan in terms of what they say about movement along one path or the other. Our basic approach was to utilize techniques from our human behavior analytics to first start with theoretical propositions about the nature of the pathways, we then tested these against historical cases used to refine our path characterizations, and finally we applied the refined paths to look at Pakistan from today forward. The general pathway descriptions we have constructed are not just applicable to Pakistan but could as easily applied to assess, for example, where Turkey is relative to fragmentation or whether Afghanistan is moving forward or slipping backward in terms of political, economic, and social development.

We used a combination of case study, empirical analyses, and theoretical work to study Botswana, Bangladesh, Turkey, Soviet Union, Brazil, Yugoslavia, South Korea, and Sudan in order to identify and distinguish between necessary and sufficient preconditions for fragmentation, the various pathways to fragmentation, and the most likely temporal orderings of indicators along each path. Based on this analysis, we then compared and explored the potential pathways associated with four hypothetical Pakistani futures—fragmentation (break-up of the state into separate, independent political units), extremist transformation (establishment of a central government pursuing policies consistent with an extremist political and social ideology, unfriendly to US interests and views), muddling through (chronic weakness of the state without major deviation from current status quo), or happily ever after (strengthened, unified state and economy friendly to US interests and views). Once each outcome was defined, the potential pathways that would have taken Pakistan were delineated and the set of primary economic, social, and political indicators of each were identified. This provided us with a descriptive analysis of each of the futures as well as their antecedent conditions.

One of the challenging aspects of this type of analysis is to determine the relationship between various indicators and how they contribute to our identification of a particular pathway. This required an ordering and weighting scheme among the variables, where some signposts are weightier evidence of a particular path than other signposts. An understanding of the relative importance and temporal ordering of the indicators enabled us to more precisely determine which pathway the weight of the evidence suggests Pakistan may be moving down at a particular point in time. Our objective was to develop a means for analysts and planners to recognize changes in Pakistan’s trajectory, for example, moving away from muddling through toward a different pathway and providing clues as to which additional path indicators to watch for. However, we do not expect that conditions in Pakistan would correspond absolutely to any single pathway at any point in time. On the contrary, we expect to see indicators corresponding to a number of pathways at most points in time. Thus, the more appropriate aspect our analyses was not Which pathway is Pakistan on? but What does current evidence is the dominant pathway, i.e., where is the balance of the evidence? 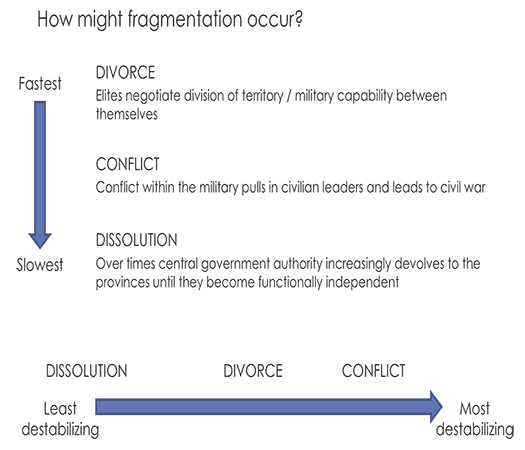 We defined the endpoint of the fragmentation pathway as the break-up of Pakistan into separate, independent political units. This means that rather than the myriad of ways that nation-states’ borders might change (e.g., border disputes, external edict, etc.) or instances of civil conflict where groups fight over control of the entire state (e.g., the Iranian Revolution), fragmentation pathways include only those scenarios that involve one or more groups seeking to form a new state from some portion of the territory that presently comprises Pakistan. Fragmentation outcomes relevant to Pakistan are those in which some sub-national group (ethnic, religious, tribal, or class-based) desires greater autonomy and seeks to achieve this by gaining independent control over part of the territory of the state. The outcome of a fragmented Pakistan could occur completely peacefully or could involve the use of limited or major force. Initial analysis suggests three pathways to fragmentation in Pakistan’s future:

An intentional and mutually negotiated division of territory. In Pakistan, especially in the foreseeable future, this would require either the direct participation or acquiescence of the military particularly with regard to the disposition of military capabilities. A divorce path to fragmentation does not require split within the military.

Limited violence to all-out war. As noted, this is distinct from instances of civil conflict where the main objective of fighting is regime change (as in a revolution). Thus, for a conflict path to emerge, there must be at least one party with intent to separate territorially from the current state. In Pakistan, it appears most likely that for militarized conflict of a scale sufficient to fragment the state to occur, the military would have to be involved on one or both sides of the conflict.

Central government authority increasingly devolves to the provinces until they are functionally independent.

The speed at which the fragmentation outcome is reached as well as the extent of instability along each pathway can vary. As with different outcome paths (i.e., fragmentation v. extremist transformation), we expect that indicators of divorce, conflict, or dissolution fragmentation paths could occur simultaneously. For example, in early 1970, the weight of evidence showed a divorce by East Pakistan to be the dominant pathway. However, in March of that year, violent clashes between the military and protesters represented early indication of a shift from divorce to a conflict pathway.