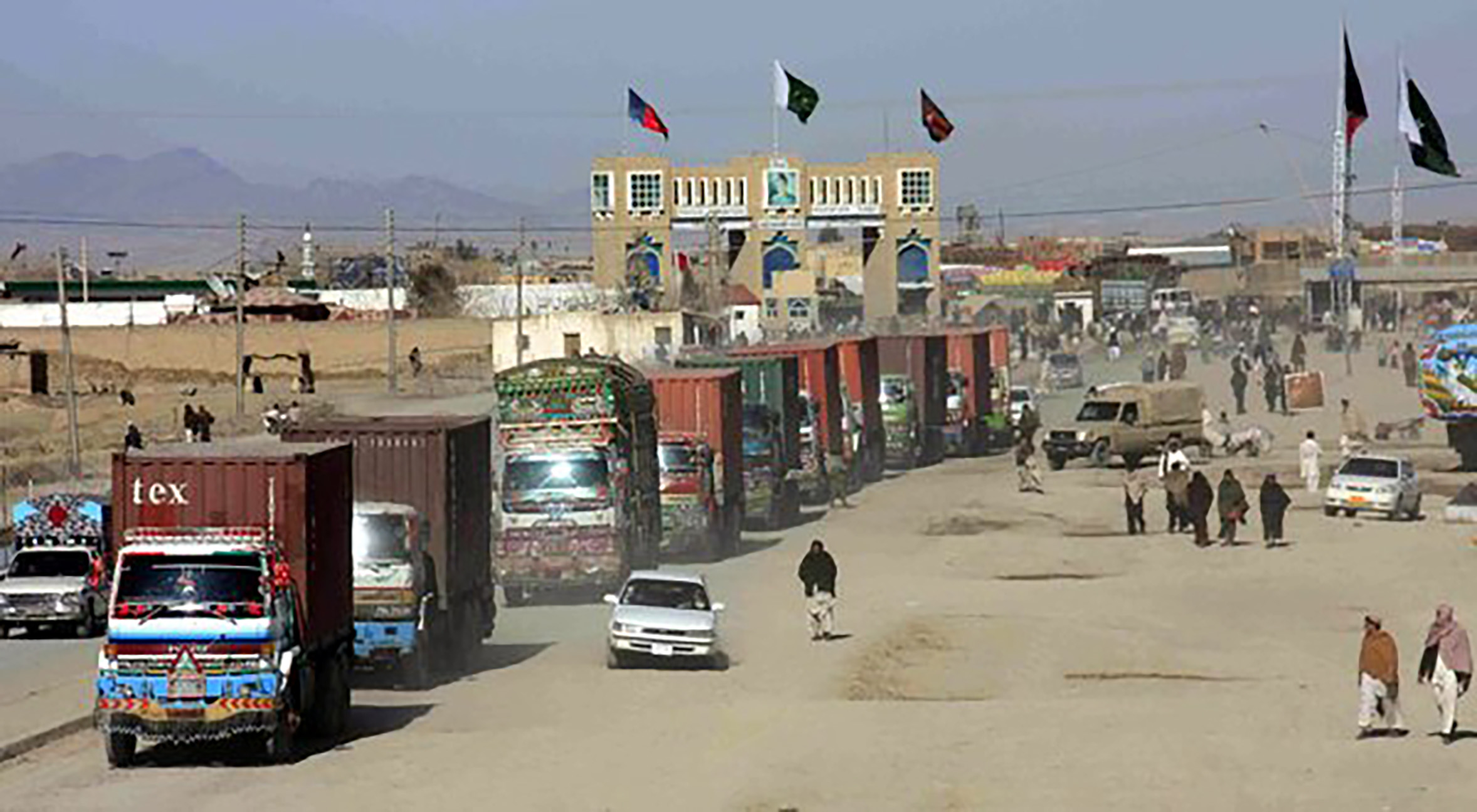 Pakistan sits at the center of South Asian regional security dynamics. Each of its several international borders has been both the cause of inter-state dispute and the site of militarized conflict. There are high levels of crime, violence, and sectarian conflict, and the writ of the state is challenged in many areas of the country. Porous borders facilitate organized crime, and militant activity further challenges state control and threatens the physical security and wellbeing of the Pakistani people. Investment (both government and private) in the weakly institutionalized, corrupt, and aid-dependent formal economy is insufficient to keep up with population growth, let alone enable Pakistan to reach its Millennium Development Goals. Finally, weak civilian governance, and a strongly politicized military blurs the lines of de jure authority. Yet, despite these significant problems and frequent predictions of imminent failure of the Pakistani state, Pakistan persists. Struggles over division of authority between the judiciary and elected leaders have weakened but not toppled the civilian government, or triggered a military coup. While militants continue to challenge the writ of the state, they have not succeeded in fracturing Pakistan or establishing uncontested control. Discussion of the causes of Pakistan’s problems, and prescriptions for their cure are plentiful; however, there is less to be found on the factors that have enabled the Pakistani state and people to survive these challenges. Addressing the question of why Pakistan has not failed is equally important if we are to develop a complete picture of Pakistan’s current situation and future trajectory. This requires us to determine not only the factors that drive instability, but also those that buffer stability.

PaK-StaM is a conceptual model of state stability that systematically identified the drivers of instability as well as the buffer of stability (areas of resilience) in Pakistan. The PaK-StaM addressed a number of key questions regarding the factors that underpin stability and instability in Pakistan: Which are the factors that most significantly contribute to governing, economic, and social stability in Pakistan? Are there factors commonly associated with stability that have no effect or have divergent effects on stability in Pakistan? What are the primary effect dependencies among factors? Is the effect of specific factors likely to change with time? PaK-StaM illuminated several factors that appear to be pivotal to stability conditions in Pakistan. Each of these have short and longer-term implications of a critical domestic factor identified as driving stability conditions in Pakistan including: the grey economy; formal foreign remittances; patronage; weak civilian institutions; education; and access to information. The full Pak-StaM report has detailed chapter write ups for each of these six factors. Our analysis concluded that while there are evident drivers of instability, there are also less immediately evident areas of resilience that buffer the stability of the state of Pakistan and its people. Moreover, the factors that appear to underpin Pakistan’s resilience to collapse are closely linked to those that may promote instability in the longer term. That is, it appears that, for Pakistan, shorter-term stabilizers can easily become destabilizers in the longer term. Conversely, there are factors that disrupt to the status quo, and can appear destabilizing, but are in fact an essential part of generating the structural changes Pakistan needs to achieve long-term stability. Accounting for both the short-term and long-term effects of various drivers of stability is essential for understanding their full implications for stability.

In 2014 Nigeria overtook South Africa to become the largest African economy. The benefits of this economic success have not, however, translated into increased quality of life for the majority of Nigerians. Furthermore, Nigeria has factors often associated with high levels of instability. In particular: a history of military rule; strong religious and ethnic identities, and a lack of strong national identity; rapid urbanization; political and economic inequality between social groups; a disproportionately large youth population (“youth bulge”); widespread lack of access to basic services and food insecurity. There is also dissatisfaction with how the government is handling extremist threats, and data from various public opinion polls indicates that security-related issues are perceived to be very important; however, concerns over unemployment and poor economic performance are even greater. While there is also overall dissatisfaction with government performance in the security area, and more generally, this dissatisfaction with government performance is not translating to dissatisfaction with democracy more broadly. Numerous polls report that the percentage of Nigerians reporting that democracy is preferable to any other kind of government remains high, and the research suggested that the government policies in place currently are compatible with the traditional values of the major social groups. Low levels of military investment by the government has resulted in a Nigerian military that is currently underequipped and lacks the modern military hardware it needs to counter Boko Haram and other violent extremist organizations. While this limitation in defending Nigerians against internal threats is suffering and a driver of short-term instability in Nigeria, in the longer term, it may contribute to governing stability by decreasing the likelihood that the military will have the necessary capability and influence to stage a coup, or the popular support necessary to maintain it.

One of the strengths of the StaM is that it is a comprehensive model of system stability, incorporating social, economic and political (governing) dimensions. The initial output of a StaM analysis is the creation of an AOI-specific tailored StaM, in this case Nigeria-StaM. The tailored Nigeria-StaM is then used to conduct a variety of analyses of Nigerian drivers of instability, buffers to stability and the exogenous conditions that can intensify these effects. The importance of this holistic approach is demonstrated by the Nigeria-StaM analysis of oil bunkering in Nigeria. At first glance oil bunkering would appear to be an economic issue; however a Nigeria-StaM analysis demonstrates that one of its primary drivers is rooted in a social stability phenomenon—perceived relative deprivation—and it has implications for all dimensions of stability. This immediately tells us that simple interdiction to the issue is unlikely to be an effective response, as the root cause (perceived deprivation) would remain, likely giving rise to other forms of compensatory action. Nigeria-StaM analysis exposes the fact that oil bunkering can have an immediate positive effect on quality of life for some (increasing social stability directly, and through this governing stability) by providing income to individuals and groups who have few economic opportunities. However, at the same time, the environmental damage has an immediate, negative effect on quality of life for others. When we consider both short term and longer-term stability implications, similar confounding findings emerge. In the short term, those who participate in oil bunkering directly, and those who benefit indirectly through the additional money it generates for poor regions, see increases in their economic security, which can buffer social and even governing stability. However, this must be balanced against the damage to physical infrastructure, loss of government revenue, and potential loss of foreign investment that this practice creates, each of which can be shown by the loop diagram to have a host of additional concomitant first and nth order effects (e.g., on economic growth and development, value of the formal economy, and ultimately even quality of life—counteracting the positive impact on quality of life that follows more immediately from oil bunkering activity). Oil bunkering is a symptom of more systemic problems within Nigeria that have their roots in social and governing stability factors. Even if it were possible to stop or even limit the practice, the motivating factors behind oil bunkering activities (viz., perceived relative deprivation, corruption, dissatisfaction with distribution of oil revenues) would remain as drivers of instability for the country. In this way, oil bunkering exemplifies one of the primary challenges facing Nigerian government moving forward; how to demonstrate to a socially diverse population experiencing vastly different outcomes from Nigeria’s growth, that it is willing to and capable of translating that national level growth into measurable improvement in the lives of all Nigerians. 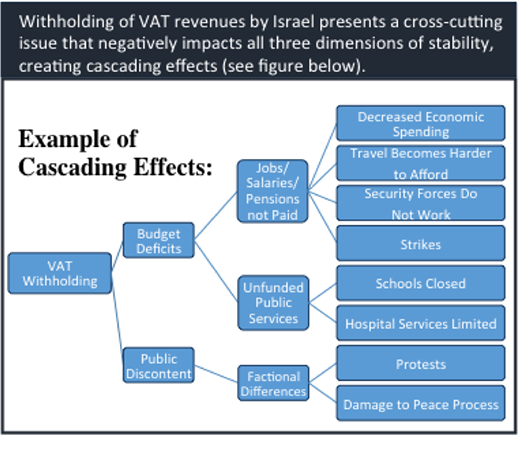 The situation in the West Bank is unique in that it includes areas that are governed solely by the Palestinian Authority (PA), areas that are under joint administration of the PA and Israel, and areas that are completely under Israeli control. Moreover, Palestinians face escalating levels of economic, social, and governing instability that collectively degrade the governing legitimacy of the Palestinian Authority (PA). Recognizing the complexity of the situation for Palestinians in the West Bank, the overarching focus for our stability modeling analysis was with respect to the linkages between security, economy, and governance, and with recognition that each is needed to support a functioning state, where the international community should make investments.

We decomposed this into three questions for the WB-StaM to address: What are the factors that most significantly contribute to governing, economic, and social stability in the West Bank? Are there factors, commonly associated with stability, that have no effect or divergent effects on stability in the West Bank? and What are the primary effect dependencies among factors? The WB-StaM examined multiple factors to illuminate the economic, social, and political stressors (instability drivers) that lead to instability, as well as the economic, social, and governing capacities for resilience (stability buffers). Key findings from our WB-StaM analysis, include: VAT withholdings and declining foreign aid are causing a cascade of impacts that are crushing the economy, undermining the legitimacy and capacity of the PA, and impairing basic human rights and needs; political stalemate on the West Bank degrades perception of PA legitimacy, while the PASF is feared and seen as working with the IDF and violating human rights; high youth unemployment and inappropriate job training, coupled with a climate of conflict, could lead to uprisings among younger Palestinians; and increased limits on protests and speech further a growing discontent and risk retaliatory actions.