What COVID Reveals: Global Governance in Flux and Possible New Directions for Government 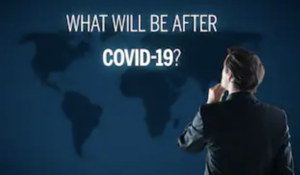 Dr. Zalman began her presentation by discussing the current distribution and redistribution of power in the world. Global power is shifting, and the conditions of the mid-twentieth century—and expectations surrounding how the world looks—have moved to a different place. Corporations, citizens, governments, and regions all possess different kinds of power and different amounts of power relative to each other in the current global system. The pandemic pushed this pattern of redistribution, as it launched the world into a crisis. Some of the effects of this radical redistribution and decentralization of a hegemonic, nation state-focused world of the 1950s that we are currently observing are becoming evident during this pandemic, and Dr. Zalman argues that they can be useful for us to understand. She likened this situation to the Earth drying out, revealing grooves and patterns that were once under water and could not be seen (or were not noticed). While these previously unobserved effects pose numerous negative ramifications, the pandemic has also brought together the global scientific community in order to produce a COVID-19 vaccine.

Dr. Zalman then painted a picture of the post-COVID world. She noted that although the COVID-19 pandemic is predominantly considered a crisis worldwide, this sentiment is not universal (think of New Zealand, Australia, and small islands that have had no reported cases of COVID), nor is the sentiment surrounding the distribution of the vaccine. There are crisis conditions in the US, Europe, and elsewhere that have not manifested internationally. Furthermore, people have not been affected equally; white and black individuals, for example, have experienced very different pandemics. Economic health and public health are at odds all over the world, and there does not appear to be a way to organize ourselves at a global or national scale that do not include a trade-off between the two, Dr. Zalman argued. Modernity in the international system has transformed individuals’ understanding of what a remedy looks like, what public health should entail, how one should be living, and beliefs more generally. Individuals also have new expectations of global coordination and supply as a result of the pandemic. Finally, the speed and scale of transmission is sped up, and thus, the impact of second- and third-order effects is quicker as well.

To conclude, Dr. Zalman spoke about how we can model the post-pandemic world. She discussed what existing projected scenarios account for in epidemiological and geopolitical projections and presented some sample metrics in a power-distributed world as well.