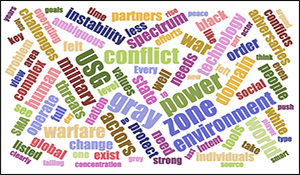 Since the end of the Cold War and with the advent of the new century, new geopolitical realities have emerged that have made classical wars with national military forces pitted against each other far less likely. What we are witnessing are new categories of conflict that cannot be considered full1scale wars in the classical sense but cannot be described as “peace” either. Small1scale conflicts are complemented with intense engagement in the Information and other Spheres. These will almost certainly have great implications in the legal domains as well new forms of alliances. Multiple factors have come into play for these trends to emerge. This is a story of change versus continuity, and the conference focused on what has changed since the collapse of the USSR. As such, there are structural and intellectual challenges that prevent the United States Government (USG) from adapting and thriving is this new environment.

Such blurring of war and peace is directly related to the softening of previously considered “solid” categorical binary distinctions (state/non1state, criminal/noncriminal, licit/illicit, etc.). Much of our diplomatic, legal, and military affairs have been predicated on being to able draw clear distinctions between these categories, and many actors are realizing that blurring them provides “strategic ambiguity.” Many of the issues associated with the blurring of these categories are most obvious in the cyber realm. Many of our adversaries are much better than we are at dealing with and, indeed, exploiting these fluid situations.

There are several factors contributing to the issue of “blurring of war and peace.” These include changes to the

Some of these concepts have been around for many decades like Military Operations Other Than War, but there are some fundamental differences that require very different framing and structure, and we simply have not gotten our heads around it as a nation. Government control of information is fading, which has given rise to the global citizen phenomena and globalized what were once geographically bounded, nationalist movements. Even terrorism is globalizing. We read headlines, discuss, and face things today that just did not exist 40 years ago…but our structures to cope were built 70 years ago. We are structured for regime change, to fight nations, and now, by proxy, “groups,” but we have not got a clue how to defeat “movements” that do not possess the familiar nation1state center of gravity and, increasingly, that is what we will face. This all speaks to the limits of power as the sources, derivation, and locus of power is being completely reinvented. The question is do we need a new plan to orient ourselves to face these challenges?

The intent of the conference was to examine the root causes of these new types of conflicts and their implications and provide a contextual understanding. The emphasis was predominantly on the diagnosing of the underlying causes, about orientation, and getting to a meaningful articulation of the problem. In so doing, the conference emphasized and highlighted the need for a “whole1of1government” approach to facing and coming to grips with these challenges. These include military power, diplomacy, and criminal justice, etc. The Panels ranged from those with holistic understanding of these trends to others with a regional focus.

Strategic Multi1Layer Assessment (SMA) provides planning support to Commands with complex operational imperatives requiring multi1agency, multi1disciplinary solutions that are NOT within core Service/Agency competency. Solutions and participants are sought across USG and beyond. SMA is accepted and synchronized by Joint Staff/J139 DDGO and executed by ASD (EC P).

This executive summary highlights key insights derived from speaker and participant interactions. This summary is meant to be comprehensive but does not force consensus. In fact, this summary should highlight that there is a high degree of ambiguity regarding what the gray zone is, what the USG should do about it, and what key questions remain.

The gray zone seems to be a return to an older, more expansive view of how an actor pursues its interests on the international scene. Yet, it only seems “gray” or “new” to us because we have defined a black and white lens through which to see the world. Others clearly do not feel they get value from adopting a similar black and white lens and act in ways that transgress our starker worldview.

Our tendency to think about the world in terms of black and white originates from our success in constructing a world system after World War II that conformed to our values and preferences, making us perfectly adapted to that initial state1base system of global order. As each technological advance concentrated power in fewer and fewer actors, the USG established its hegemony in the international system.% Then the USG created the cyber domain, and it had the opposite effect. It empowered individuals everywhere.

What is our goal in the gray zone?

Conference participants seemed to agree that the US goals with regard to the gray zone should push the USG “left of boom.” The goal is to identify and mitigate threats before they erupt into militarize conflict. Staying in phase zero is victory.

Participants nearly all agreed that gray zone challenges take place primarily in the human domain. However, there were two schools of thought regarding the concentration of power. One school of thought felt that state power (as employed by Russia and China) are resurging in news sorts of ways in the gray zone. Both Russia and China have seen the rise of strong, autocratic leaders such as Putin and Xi. The other school of thought acknowledged that while some strongmen remain, in general, power is fragmenting as individuals are empowered. Proponents of the second school of thought argued that the problem with the concentration of power idea is that it correlates wealth concentration with power concentration, which is the exception not the norm in this environment.

Regardless, we seem to be seeing the breakdown of global institutional order, which has changed the distribution of power. This is complicated by the fact that our adversaries now have access to tools and weapons systems previously reserved for states, especially with regard to cyber, drones, and miniaturization. Furthermore, adversaries and competitors will not be constrained by artificial boundaries like the law, bureaucracy, authorities, etc. They operate seamlessly and make decisions quickly.

The gray zone has been alternatingly described as an operating environment, a type of conflict, and a strategy. Some felt it exists outside (left of) of the conflict spectrum, some felt it primarily took place in phase zero, and some felt it occurs across the full range of conflict. If you look for opportunities within the gray zone, you realize that the area right of boom is the domain of threats and military conflict, the area left of boom is the domain of opportunity. This domain includes acceptable, if not preferable, competition that we take in order to protect our national interests. The USG clearly sees the gray zone as a threatening, but we should not discount opportunities as well.