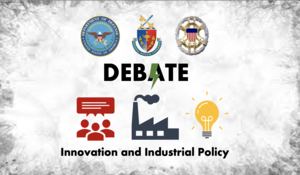 Dr. Atkinson argued that the US needs an industrial policy because it is already deep in economic and technological competition with countries around the world, including China. Because the USG is aware of this economic and technological competition, it already has an industrial policy, even if not explicit. Industrial policies can fit along a spectrum from a true laissez-faire approach to an economy that is strictly controlled by a central government. Dr. Atkinson argued that the industrial policy he supports is not an economy run directly by the central government, which picks winners and losers. Instead, he advocated in favor of supporting strategic industries with increased federal funding to better compete with US rivals abroad for the global market share. This funding will also help companies in the private sector maximize their societal returns, which are 40 percent of what they should be, according to Dr. Atkinson.

Mr. Thornhill argued against US adoption of a robust industrial policy. He first provided an antidote of two USSR textile factories: one of which was constructed to produce tiles and the other of which was created to destroy subpar textiles. The need to create faulty textiles to keep the second factory running is an example of a non-market incentive that a government-run economic policy can create. He argued that a robust US industrial policy may focus on the wrong incentives. As a result, the United States’ free market could become less free, and kill zones surrounding the US’s largest companies could expand, which would in turn lead to less competition. Mr. Thornhill argued that instead of an industrial policy, the US needs a robust anti-trust policy that keeps its markets competitive and keeps its educational institutions minimally influenced by the USG. By maintaining its educational system, the US will continue to attract top talent from other countries as well.

Both Dr. Atkinson and Mr. Thornhill mentioned in their rebuttals and closing statements that they agreed on several points, including that an industrial policy that gives the USG a large amount of power would not benefit the nation.Dr. Atkinson emphasized that the type of industrial policy he is an advocate for would support strategic industries in the US and not determine winners or losers. However, Mr. Thornhill emphasized that implementing a true industrial policy at the state level may stifle innovation, which he believes is a process of natural selection.