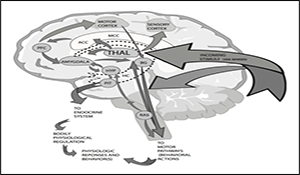 A Primer on the Neurocognitive Science of Aggression, Decision Making, and Deterrence.

here are numerous national security challenges relative and relevant to the aggressive and/or violent intent and behavior of individuals, groups, and societies. In an ever more networked world, the ways that people think, emote, and behave are being increasingly affected by social, and informational factors; many made possible or fortified by the iterative use of various forms of technology. Despite demonstrably positive outcomes of such trends, there are also clear and present burdens, risks, threats and harms in the geo-political sphere that current and near-future social and technical developments can, and likely will incur.

A recent global risks study by an international forum of experts elucidated such geo-political and societal threats to national security, and emphasized interactive elements including social instability, individual and groups’ vulnerability to social volatility, radicalization, terrorism, and interstate conflict, as being strongly contributory1. Each and all of these factors can be conceptually and practically reduced to the decisions and actions made by individuals, and/or groups, whether acting alone or as state actors. Attempts to investigate contributory variables and possible causes of such threats to social stability and peace have entailed a variety of disciplines (e.g. – social and political sciences, anthropology, psychology, economics, etc.). Thus, resulting theories of correlation and causality reflect the diversity of these disciplines’ approach(es) and focus, to include resource scarcity, perceived unfairness, pride/nationalism, vengeance, anticipation of reprisal, preservation of cultural norms, and risk/threat and fear of harm, and/or death. Such studies have paved the way for various agencies within the United States government (USG) to consider the use of a variety of tools to address these issues in national security, intelligence and defense (NSID) operations to prevent violence, deter unwanted actors, and foster cooperation.