America and the World: A History of U.S. Diplomacy and Foreign Policy 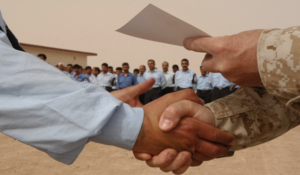 Mr. Zoellick began by discussing the overall message of his recently published book. The book stresses the importance of studying the history of US diplomacy and foreign policy in order to make better decisions in the future. He argued that there should be an emphasis on pragmatism to strategically determine the best ways to design and implement policies and also emphasized the importance of incorporating both strategic and tactical components into operational perspectives. Gen Petraeus agreed with these points and stressed the criticality of studying history in order to prepare for the future. Mr. Zoellick then pointed out that even small gestures can influence great people and events, emphasizing that they are important tools in effective diplomacy and leadership.

In his book, Mr. Zoellick uses a variety of important historical figures, such as Benjamin Franklin and Elihu Root, and events, such as the Revolutionary War and Civil War, in order to discern patterns that are useful in looking at future diplomacy and foreign policy. For example, he discussed how Alexander Hamilton was a key actor with a strategic outlook for the US and how critical that proved to be for American diplomacy. Mr. Zoellick drew historical context from numerous chapters in his book throughout the conversation, identifying scenarios and choices made in the past that he believes can influence present-day issues, such as arms control.

Gen Petraeus then stressed the importance of rebuilding the relationship between the government and technology firms (within Silicon Valley, in particular). He emphasized that large technology firms that are not interested in helping the US government, or more specifically, the Department of Defense, are not conducive to the government’s interests. This relationship used to be spectacular; however, it became quickly undermined by the revelations propagated by Edward Snowden, Gen Petraeus explained.

Mr. Zoellick then spoke about Lyndon B. Johnson and how to learn from defeat. He identified the various areas in which Johnson failed with respect to the Vietnam War, in particular. The first factor was the failure to recognize the power of recent history, or the failure to look at both the Korean War and World War II. In a crisis, it is critical to use past instances to pose and analyze new questions thoroughly, he stated. The second factor Mr. Zoellick identified was credibility. Credibility for nations is similar to reputations of individuals. Furthermore, presidential experience in the study of psychology can prove to be a useful tool in influencing others through policymaking. America’s faith in its military power is also a crucial factor—will the military start to become an overused general purpose tool, for example? In the case of Vietnam, this was a controversial issue. Combining military power with diplomacy is another important aspect of learning from defeat, Mr. Zoellick explained. They are not distinct. In other words, military power can have a deterrent effect without always requiring a nation to be on the offense. The last factor Mr. Zoellick presented was the failure of advisors. Presidential teams are significant from diplomacy and foreign policy perspectives. Johnson lacked a strong advisory team, and this ultimately led to a lack of thorough recommendations and assistance to the president. Gen Petraeus expanded on this point, offering personal anecdotes from his time in the government and highlighting the importance of providing presidents honest opinions and strategic thought.