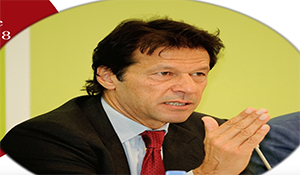 This study was conducted to address the question: How can the US increase the resolve and capability of Pakistan to support political reconciliation in Afghanistan and the region?

Two methods of textual analysis were applied to a corpus of 30 Imran Khan speeches that spanned the period of 2007 to 2018, although most speeches postdated 2013 and represent his recent rise to power. The methods were quantitative discourse analysis (QDA) and the Linguistic and Inventory Word Count (LIWC).

The primary political themes Imran Khan expressed in his public discourse are:

• The political machinery of Pakistan and criticism of his political opponents;
• Fighting corruption;
• Appeals to religion (generic Islamic values) and appeals to the common masses;
• Pakistani domestic terrorism and extricating from American counterterrorism efforts;
• The Pakistan economy; his interest in the economy has surged in recent years;
o Imran Khan has a decidedly left-of-center, welfare state model of economic development that he claims is consistent with Islamic principles.
• His interest in education has increased in recent years, emphasizing improving its quality and access to it, including for women and girls.

Imran Khan foreign policy:
Imran Khan claims to seek positive foreign relations with India, the U.S., Afghanistan and China. His views on India are unconventional within the context of traditional power elites in Pakistan. The extent to which the Pakistani military has dominated Pakistan’s foreign policy and their seemingly close relationship with Imran Khan may limit his ability to act independently on these issues.

His language use indicates the following psychological characteristics
• His language exhibits high status and a need for power;
• He has a negative worldview;
• His interest in economic issues is increasing in time;
• His anxiety levels, although initially high, are decreasing through time.

General implications of these findings:
• Imran Khan is very political and particularly open to positions that would enhance his standing and power
in domestic politics.
• Support that would enable him to contend with incidents of domestic terrorism and to improve both the
Pakistani economy and education system should be particularly attractive to him.
• His appeals to religious conservatism manifested among the common masses (as opposed to formal clergy or Islamic extremists) are vital to maintaining his base; positions that would threaten these appeals
would be contrary to his interests and possibly his genuine sentiments.
Implications for Afghanistan reconciliation and reintegration:
• Imran Khan has stated that he would like to be a broker in Afghan reconciliation efforts. If he is truthful in
this intent, aiding him in shoring up his power domestically is likely to help increase his resolve to support Afghan reconciliation and reintegration. Political issues that matter most to him in his public discourse include:
o Domestic terrorism, the economy, education, and maintaining his common, rural and socially conservative base;
o FightingcorruptioninPakistan;
o ForeignaffairswithIndia,theU.S.,AfghanistanandChina.
• An important caveat is that Imran Khan’s ability to advance his foreign affairs agenda, including
reconciliation in Afghanistan, could well be thwarted by Pakistan’s military establishment.