Assessment of Possible Reactions in German-Speaking and East Central Europe and the European Union (GS-ECE/EU) to Possible Strategic Outcomes in U.S.-DPRK Relations 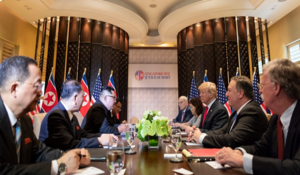 Assessment of Possible Reactions in German-Speaking and East Central Europe and the European Union (GS-ECE/EU) to Possible Strategic Outcomes in U.S.-DPRK Relations

The Democratic People’s Republic of Korea (DPRK) does not currently constitute a strategic threat via inter-continental ballistic missiles (ICBMs) to German-Speaking and East Central Europe (GS-ECE), to the States of the European Union (EU), or to non-EU European States. Proven and potential cyber threats do exist, however, as does the proven threat of traditional espionage.

Certain States of GS-ECE/EU have direct security concerns regarding how U.S.-DPRK relations might develop. These concerns arise in the context of three international frameworks:

1) These States’ membership in NATO and their resultant commitments to the United States and Canada under a possible invocation of Article 5 of the NATO Treaty in the event of war between the U.S. and the DPRK.

2) These States’ concurrent (though separate) strategic and security concerns in the European Union’s Common Foreign and Security Policy (CFSP) and the CFSP’s subsidiary Common Security and Defense Policy (CSDP). The Republic of Korea (ROK) is a party to elements of both the CFSP and the CSDP.

3) These States’ current (as of 31 August 2018) negotiations with Japan for a Strategic Partnership Agreement to address, inter alia, matters of common security interests.

The States of GS-ECE and, by extension, the EU (whether members of NATO or not) have immediate and very substantial economic interests in all possible outcomes of currently developing (as of 31 August 2018) U.S.-DPRK relations. These interests arise primarily via:

2) Bi-lateral trade between Beijing and Berlin. In Europe, Germany is the PRC’s principal bi-lateral trading partner in both imports and exports. As of May 2018, Chancellor Angela Merkel has visited Beijing 11 times during her tenure in office which began in 2005.

3) The EU-ROK Free Trade Agreement (EU-ROK FTA). The EU-ROK FTA was provisionally applied as of 2011 and was formally ratified in 2015.

Reactions in GS-ECE/EU to possible deterioration in U.S.-DPRK relations must be viewed first and foremost through the lens of the withdrawal by the United States from the Joint Comprehensive Plan of Action (JCPOA) with Iran. The U.S.’ withdrawal has proved deeply unpopular in GS-ECE/EU, as well as for non-EU European States. Washington’s action affects vital European security and economic interests in the Middle East, the Balkan Peninsula, and the Mediterranean Basin. Washington’s action also places GS-ECE/EU on the same side of a critical strategic issue as the U.S.’s avowed or potential adversaries, namely Russia and China. It remains to be seen whether GS-ECE/EU commonality of interest with Russia and China in opposition to the United States on the JCPOA will sustain itself over time in the face of threatened U.S. secondary sanctions and separate U.S.-EU arguments over tariffs on steel and aluminum which were imposed by the U.S. government on 31 May 2018. So long as this commonality of interest persists, however, it could adversely affect GS-ECE/EU attitudes and governmental policies towards U.S. decision-making regarding the DPRK, particularly if U.S.-DPRK relations deteriorate as a result of lack of progress toward Final, Fully Verified Denuclearization (FFVD).

Given serious, existing strains in transatlantic relations dating to 2016, any deterioration in U.S.-DPRK relations would likely generate significantly increased doubts in GS-ECE/EU and elsewhere in Europe about both the quality and the continued value of the United States’ international leadership. This consideration would apply most particularly in the event of armed conflict on the Korean Peninsula. Already-extant animosity towards the United States among European populist parties (of both the Left and the Right) and/or in certain European governments, as well as concomitant sympathy for Russia, would thereby equally likely grow. To the same degree, any such developments would work to the near-term geo-strategic and economic advantage of Russia in Europe and possibly the long-term advantage of China. Exceptions to such a prognosis might be found in Poland and the Baltic States, however, where historically-conditioned suspicions of Moscow’s geo-strategic intentions remains pronounced.