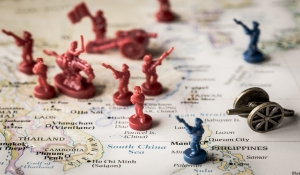 In support of the USAF and the SMA, the TRADOC G-2 Modeling and Simulations Office (M&SO) employed the Athena Simulation to assess a series of research questions posed by the Air Force, as well as to test a series of explorable insights (hypotheses) developed during the project’s Net Assessment and Subject Matter Expert (SME) engagements. A total of 35 explorable insights were identified during the Net Assessment from which four specific study topics were derived for analysis utilizing the Athena Simulation. These included:

This Final Study Report compiles the results and insights derived by the Athena team from research, SME engagements, Athena Simulation runs, and the collaborative analysis conducted with other members of the SMA community of interest and provides a series of conclusions addressing the overarching SMA project objectives and questions.

The Athena Simulation is a sociocultural modeling capability that provides decision makers an improved understanding of the intended and unintended consequences, the second and third order effects, of their engagement options (police/military force activities, economic engagements, information operations, etc.) upon noncombatant populations when viewed across the entirety of the Operational Environment.

Two separate instantiations of the Athena Simulation were used to model information operations (IO) and competitive messaging dynamics to assess potential regional stability effects. The first scenario was primarily centered in the South China Sea and focused on the Philippines with China as the major international actor. The second scenario was primarily centered in the Eastern Mediterranean and focused on the counties of Turkey, Greece and Cyprus, with Russia as a major actor.

To inform the study objectives and provide an improved understanding of the underlying political, economic and sociocultural dynamics at work in each of these studies, multiple use cases were employed for each scenario to provide a range of possible futures. These use cases defined conditions leading to modeling outcomes that enabled a comparative analysis of Athena results to be conducted in this report.