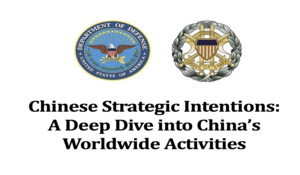 This white paper was prepared as part of the Strategic Multilayer Assessment, entitled The Future of Global Competition and Conflict. Twenty-seven experts contributed to this white paper, providing wide-ranging assessments of China’s domestic and international activities in order to assess the future of China and the challenges that these activities may present to US interests. This white paper is divided into five sections and twenty-four chapters. While this summary presents some of the white paper’s high-level findings, the summary alone cannot fully convey the fine detail of the experts’ individual contributions, which are worth reading in their entirety.

There is broad consensus among the white paper contributors that understanding the reasons, motivation, and strategy behind China’s actions is critical. Several of the contributors highlight the motivations behind China’s global activities. For example, one driver of China’s actions is the Chinese Communist Party’s (CCP) belief that it is currently in a state of competition with the US (Cheng). A sense of insecurity about the future (Copeland) and a desire to maintain power also influence CCP behaviors (Copeland; Mazarr; Watson), as does the Party’s belief that information is inseparably linked both to the national interest and to the CCP’s survival (Cheng).

Other contributors focused on Chinese strategy. Internally, the CCP uses humiliation, distrust of the US, and China’s historical grievance to validate its rule and maintain power (Watson). Externally, China has developed a form of “strategic integrated deterrence.” This concept—which goes beyond military capabilities to incorporate political, diplomatic, economic, information, psychological, and scientific/technical capabilities—is designed to “deter and compel the US prior to and after the outbreak of hostilities” (Flynn). Given the criticality of information to regime survival, the CCP deems it necessary not only to control and influence information flow into China, but also to shape and mold the international structures that manage this flow (Cheng). Similarly, the CCP recognizes the importance of data—particularly for social control. The Party seeks to embed its model of social control into the technological matrix built and powered by Western tech companies, according to Dr. Robert Spalding III. It also seeks to expand and guide the development of tech-based businesses and social models in the future, and in order to do so, the CCP may recognize the benefits of adopting a more open system.

Several contributors indicate that China is well-positioned to become a world leader in science and technology research and development (S/T R&D), blockchain technology, and artificial intelligence (AI) technology. Dr. James Giordano, CAPT (ret) L. R. Bremseth, and Mr. Joseph DeFranco indicate that China is making significant investments in international scientific, biomedical, and technological markets for strategic purposes. Moreover, China intends to align its S/T R&D with explicit national directives and agendas to exercise its global hegemony and could leverage its S/T to disrupt global balances of order and power (Giordano, Bremseth, & DeFranco). China is also aiming to dominate the finacial technology (fintech) sector. Several Chinese companies possess digital payment systems that have major competitive advantages in the form of scale and proprietary technologies (Nandakumar). These companies could easily become market leaders if blockchain-based financial systems become the norm, and blockchains can also be used by the CCP for strategic purposes. Lastly, according to Mr. Gregory Allen, the CCP believes that AI is a “strategic technology” that will play a critical role in the future of economic and military power. Allen suggests that AI has the potential to start an “intelligentized” military technological revolution, which could give China the opportunity to narrow its military gap with the US. Consequently, China will only continue to seek leadership and make even greater use of its AI strength.

Another contributor, Mr. John Schurtz, argues that China is becoming a world leader in technology and military innovation as well. The People’s Liberation Army (PLA) recognizes the importance of leading military innovation, and as a result, it has become poised to challenge the world’s most advanced militaries in the production of next generation high technology weapon systems. China will only continue to pursue ambitious innovation objectives in these areas, as is evidenced by its ‘Military-Civilian Fusion’ (MCF) development efforts.

In this white paper, Dr. Nicholas D. Wright critically examines the relationship between digital authoritarianism and the durability of the Chinese regime. Although digitization may have negative effects on the durability of the Chinese regime, Dr. Wright argues that it can also strengthen the regime’s durability in the short- to medium-term by providing a plausible route for ongoing regime control while also making Chinese citizens wealthy. In addition, China’s development of a digital authoritarian regime enables its influence over other states in a competition for global influence, both through ideas and the exportation of digital systems (Wright). However, if China’s model is not broadly appealing to swing states, China may not be able to solidify its influence over these countries’ regimes and will ultimately lose this competition for influence. The future evolution of AI technology and the way in which liberal democracies adapt to becoming digital political regimes are also factors that could impact the situation (Wright).

China aspires to achieve global power status and challenge the US by extending its influence and strengthening its relationships with regions such as Europe; Eurasia; Central, West, and South Asia; and Latin America. One way in which China is aiming to increase its global influence is by increasing its economic footprint in these regions, as is evidenced by China’s expansion of trade and investments via its Belt and Road Initiative (Ehteshami & Weitz). China wants to secure access to valuable resources and create an “economic web” for its own benefit (Ehteshami, Watson, & Weitz). If these countries become economically dependent on trade with China, Beijing could use these dependencies to its advantage by using economic pressure to gain political compliance and/or undermine alliances with the US, as China did with South Korea and US deployment of a Terminal High Altitude Air Defense (THAAD) system (Astorino-Courtois & Bragg).

Some regions, such as Central Asia, have reacted to Chinese influence activities with hesitation and skepticism (McGlinchey). Other regions, such as Latin America (Watson), have welcomed China’s increasing engagement and have increasingly turned to China, rather than the US, to fulfill their economic needs. European states benefit significantly from access to Chinese markets for exports and have thus welcomed Chinese economic engagement opportunities as well, despite disapproval of enforced technology-transfer by domestic European companies seeking to operate in China, international property theft, and human rights abuses by Chinese companies (Dorondo).

Another outcome of increasing Chinese influence across these regions is that pre-existing US alliances with regional states are subject to increased pressure from China. Modern US alliances across the globe, and with European nations in particular, have enabled a a high level of US prosperity and security; conversely, weakening of these relationships could lead to potential US vulnerabilities (Dorondo). The diminishment of US relations with states in the referenced regions could result in economic troubles and/or a loss of regional influence, for instance. The US has the ability to counter these Chinese global outreach activities and prevent reliance on trade with China by strengthening its own relationships with these countries and using Chinese regional shortcomings to its advantage.

Despite Chinese global influence activities that present challenges to US interests and the current global order, the US must recognize that Chinese “future elites” (e.g., students from the top universities in China) still generally respect and admire American values and institutions (Gregory & Sherlock). Thus, despite the critical narratives being propagated by the Chinese regime and the competitive nature between the US and China, a significant portion of the Chinese population still views the US in a positive light, and not as an enemy.

The future of US-China competition

The future of global competition between the US and China will be centered around economic development and technological innovation (Hinck & Cooley). Dr. Michael Beckley presents a critical perspective of China’s economic growth, arguing that it is not as impressive as it appears, and that China faces several significant restraints that prevent it from closing the wealth gap with the US. However, China will try to continue to make economic strides in an effort to catch up to the US. Prof. Cynthia Roberts cautions that, despite the importance and usefulness of international financial instruments, the US should refrain from overusing such instruments. US decision makers must consider the consequences of weaponizing finance or imposing economic costs on its opponents. Such actions could result in consequences such as countries looking to diversify to currencies other than the US dollar, like the renminbi (RMB) or digital currencies, which over time could significantly reduce US leverage and give others, including China, greater freedom to maneuver.

Managing the challenges that China presents

The US and China are competing to shape the foundational global paradigm—the ideas, habits, and expectations that govern international politics (Mazarr). This competition ultimately revolves around norms, narratives, and legitimacy. The CCP has tethered its legitimacy to achieving the goals of the China Dream proposed by Xi Jinping, which include economic success, increasing Chinese influence, and defending national territories (Astorino-Courtois & Bragg). Both internally and externally, it is critical for China to highlight its successes and portray itself in a positive manner in order to make the China Dream a reality. In its attempts to achieve these goals and shape the global paradigm, China is pursuing ambitious economic endeavors, such as the Belt and Road Initiative. China’s power is also growing in the form of its military buildup, as is evident through its increased pressure on Taiwan, its limited war with Vietnam, and its conflict with India over disputed territory (Mazarr). The challenges that China presents threaten US interests and the current world order, and therefore, it is imperative that the US successfully and carefully mitigates these challenges.

Several contributors also provide recommendations for US decision makers, namely that they must acknowledge the extent to which the US is already in competition with China and recognize the range of actions that China is taking; they must also begin to counter these actions by engaging in hard bargaining, drawing clear redlines, and remaining cautious to not provoke unwanted Chinese behaviors (Cheng). One white paper contributor, Dr. Maorong Jiang, suggests that the US might need a new strategy, utilizing a soft-power deterrence approach in order to simultaneously engage, challenge, and integrate China. Additionally, Lt. Col. Christopher D. Forrest asserts that competing in the gray zone will be an integral part of this competition, where the US must focus its time, energy, and resources. In order to effectively counter ongoing Chinese gray zone actions, the US will likely need to make some cultural and organizational changes and adapt a different lens through which to view US capability development and operations (Forrest).