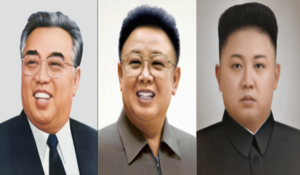 This study was conducted to address three guiding questions:

1. How does DPRK define its key national interests/regional objectives in Northeast Asia and the Western Pacific? What are seen to be the major threats to each interest?

2. Does analysis of Kim Jong-un’s discourse provide a cognitive assessment?

3. What are the most effective ways of communicating with Kim Jong-un?

Summary and Implications for Strategic Communications with Kim Jong-un

Kim Jong-un is far less geopolitically aware than Kim Il-sung and, similar to Kim Jong-il, is fairly rigid and unchanging in his political discourse. He exhibits more of an interest in economic development and in overall DPRK capability (including military) than his predecessor. The U.S. as leader of a Western, capitalist alliance is considered the ultimate threat to all DPRK national interests. Kim Jong-un appears to be relying less on Juche philosophy (see Changes in Political Ideology below) although he continues to use very abstract religious language such as sacredness and eternity. Based on these patterns and comparisons to his predecessors the following inferences seem reasonable answers to the guiding questions.

Kim Jong-un’s worldview as expressed in his political discourse is largely consistent with core concepts central to DPRK politics throughout its history. These core concepts include a dedication to communist ideals and adherence to Juche philosophy, which includes unquestioning obedience to the Kim leaders, the need for strict discipline and rules, unending revolutionary struggle, and dedication to creating a self-sufficient DPRK. However, he exhibits the following departures from his grandfather and/or father.

Kim Jong-il was much more ideologically oriented and less globally aware than his father, and exhibited an absolutely rigid adherence to his Juche philosophical frame. He exhibited no ability to adjust his political perspective or interests despite economic crisis and widespread famine in the 1990s.

Kim Il-sung exhibited a broad awareness of global politics, and an ability to adapt his political discourse to historical changes. His pragmatism was most evident during the Korean war when he largely abandoned ideological interests in favor of pragmatic concerns of prosecuting a war and surviving as a nation. Despite originating Juche philosophy, Kim Il-sung exhibits far less ideological speech than his son and grandson.