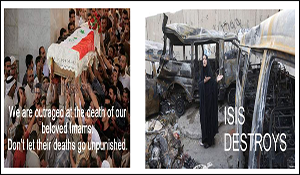 At the request of Joint Staff/J-39, the SMA program, in coordination with United States Army Special Operations Command (USASOC) and the Department of Homeland Security (DHS), participated in a second Counter-Da’esh Messaging Simulation that brought together nearly 100 Psychological Operation (PSYOP) operators, USG and international observers, interagency representatives, population experts from Iraq and North Africa, Da’esh experts, universities, and think tanks. This exercise served as both a test bed for messaging techniques and a training opportunity for PSYOP operators.

The simulation was run on a synchronous, virtual, and distributed platform called ICONSnet, designed and managed by the University of Maryland (see Chapter 6: Designing a PSYOP Wargame). ICONSnet was designed to advance participants’ understanding of complex problems and strengthen their ability to make decisions, navigate crises, think strategically, and negotiate collaboratively. This platform was selected for the following, critical reasons.

Compared to the December 2015 Counter-Da’esh Messaging simulation, “This time the anti-ISIL side was doing it right. Volume of messaging? I know my wrist was cramping up! – Mubin Shaikh, Red (Da’esh) team member, former Salafist activist, participant in both December 2015 and April 2016 simulations.

This was a simulated environment, but preliminary results suggested lessons not only for PSYOP training but also for increasing the impact of messaging in forward operations. These results are described below.

The pre-simulation preparation and consequent volume of messaging that the Blue team was able to deploy during the April 2016 simulation appeared to confound Da’esh team efforts to deliver its own messaging and forced it into a reactive position vis-à-vis interacting with the White teams. What emerged from this simulation was the realization that an increased operational tempo within the narrative space, combined with embedded, virtual expertise from a cadre of multidisciplinary experts, appeared to increase the effectiveness3 of DoD messaging in the simulated narrative space.

Several generalizations emerged from the simulation regarding the effectiveness of various kinds of messaging between the USG, Da’esh, and population teams.4 In an environment devoid of trust, the population teams often rejected USG messaging as lacking a credible voice. They suggested that USG messaging would only been seen as credible is if it were reinforced through action by Coalition forces. Instead, they preferred to hear counter-Da’esh messaging from local religious and cultural leaders. A surprising number of population segments were open to USG’s counter-Da’esh messaging in principle, but wanted to engage in a deeper conversation about how to effect change.

This exercise illustrated the benefit of using virtual, simulation platforms for testing not only message effectiveness, but also PO training and operational effectiveness.