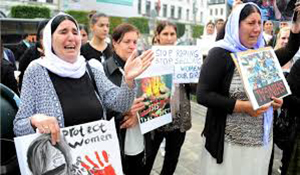 Question (V2): What are the key factors that would impact the wave of violent extremism and ideological radicalism that affect the Sunni community?

The Sunni community is not homogenous, and contributors expressed their discomfort making broad generalizations for a number of reasons. Most Sunni Arabs still consider themselves first a citizen of their respective countries with the exception of populations in the midst of conflict like Iraq, Syria, and Yemen (anonymous). Local customs and histories result in a different experience for Sunnis in, for example, France versus Chechnya (Olidort). Furthermore, there is no single Sunni leader (like the Pope or the Ayatollah or even a senior theologian) with religious legitimacy to assert leadership over the Sunni community (Shaikh).

However, experts attempted to broadly categorize risk factors—especially as they pertain to Sunnis inside and outside Combined Joint Operations Area (CJOA). Unfortunately, the factors most likely to impact waves of violent extremism and ideological radicalization are already well known to the DoD community.

Conditions that Are Conducive to Radicalism and Extremism

Failure of the Social Contract

While particularly true in Iraq and Syria, it is nonetheless applicable across the all societies that when a government breaks its social contract with its people—through exclusion from government, disenfranchisement, failure to provide equitable essential services, justice, or security—unrest often follows (Abbas, Everington, anonymous; Sheikh). ISIL and other extremist groups thrive in these conditions as people who are left with little-to-no legal recourse choose violence. Filling these voids or assisting governments to address these legitimate grievances may reduce underlying root causes of extremism (Olidort).

Hammad Sheikh, visiting scholar at the Centre on the Resolution of Intractable Conflicts at Oxford University, stated “only when ISIL is defeated in the field unambiguously will the allure of Jihadi ideology be affected.” Establishing a territorial caliphate is at the heart of ISIL’s legitimacy, so striking at that erodes the appeal and credibility of ISIL. This must be done largely by Sunni Arab forces. Atrocities by any other group will incite tribalism and feed into the narrative of jihadi groups, increasing radicalization of the wider Sunni Arab population (Sheikh).

Lack of Resolution in Syria

Atrocities committed against Sunnis in Syria struck a flint to simmering unrest in the region, allowing for the rapid rise of ISIL. The lack of resolution in Syria remains an open wound that continues to attract foreign fighters from across the globe (Olidort). “A complete resolution designed and carried out with the participation of local moderate actors would have the effect of downgrading the allure of foreign fighters and others to migrate to Syria,” Jacob Olidort, an expert on Islamist groups at the Washington Institute for Near East Policy suggested. However, as we have already begun to see, the territorial defeat of ISIL will likely force the organization to change its tactics, encouraging sympathizers overseas to conduct lone wolfs against the far enemy.

To combat extremism in CJOA, the USG could facilitate a Sunni Empowerment Campaign (Carreau). This kind of strategy would “create the strongest and most effective antidote to ISIL’s magnetism (including for local recruits and foreign fighters) and worldwide expansion (including lone wolf attacks in the west) because it will finally provide an outlet for Sunni grievances and a viable alternative to violent jihadism as protection against various forms of Shi’a oppression,” according to Bernard Carreau, Deputy Director of the Center for Complex Operations at NDU. This strategy would help build Sunni political voice in Iraq and Syria to help answer the question of who/what should file the void caused by the defeat of ISIL (Carreau).

There is widespread belief that the USG is in alignment with Iran to expand Shia influence from Tehran to Damascus. There is certainly mistrust in the ability of the world community to use diplomacy to reach a resolution (Shaikh). While this does not fuel radicalization directly, it influences the decision calculus of Sunnis to build what they see as pragmatic alliances with Sunni jihadi groups who they believe to—at the very least—have Sunnis’ best interests and welfare in mind (Olidort).

This is good news for the Coalition as Sunnis in CJOA may be convinced to turn against ISIL and other extremist groups by appealing to the other “hats” local Sunni leaders wear, such as tribal responsibilities, members of political or commercial elite, the old guard, and other kinds of networks (Olidort, Shaikh). This opens the door to other means of engagement and trust building aside from traditional counter-messaging. In fact, resolutions to challenges facing the Sunni community must remain locally generated to have any real, lasting impact (Shaikh)

Finally, Sunnis—particularly outside CJOA—turn towards ISIL and other extremist groups for a number of personal reasons (Everington). Theses range from lack of employment opportunities to discrimination to search for personal meaning (Olidort, Everington, Shaikh). These motivations vary widely from person to person even within the same geographic community and are difficult to address.