Defying the Cycle of Violence Among Children of War 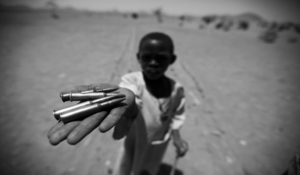 “Defying the Cycle of Violence Among Children of War“

In advance of the Turkish incursion into Syria last October, warnings about the security risks of “the children of ISIS” and radicalized youths in internally displaced person (IDP) and refugee camps in Syria and Iraq increased. Media outlets reported that women in Al Hol camp in northeast Syria were setting up their own “mini Islamic State” within the camp and terrorizing other residents in the already under-resourced camp (Sancha, 2019). The shredding of ISIS’s physical caliphate and the horrifying realization of the depths of derangement of ISIS’s treatment of Cubs and Pearls of the Caliphate—young children who serve as perpetrators, witnesses, and victims of the horrors—have raised inevitable questions about the appropriate security, moral, and legal “next steps” for these children.

Tragically, a focus on just these “children of ISIS” or “children with extremist families” is too narrow to properly address a self-perpetuating cycle of Islamist extremism and violence in the region and beyond. Here is the critical point: If we consider the “radicalization cycle” only among “children of ISIS,” we run the considerable risk of missing factors that will have severe behavioral and cognitive impact on “non-ISIS” young peoples in Syria and Iraq who have lived similarly violent and traumatic lives in prolonged conflict (Moreland, 2019).

Protracted civil conflict in which terror-inducing tactics are used (e.g., deliberately targeting civilians at home or in school, enslavement and rape of women and children, forced recruitment, and abductions) are particularly devastating for young people as they inevitably bring them to the frontlines of traumatic violence. Responding to the needs only of children who are known to have been directly in the control or care of radicalized adults is not enough. Any child who has been exposed to prolonged conflict and violence is at risk of turning to violence as a means of conflict resolution. Therefore, the focus of USCENTCOM and the USG as a whole should be on preventing violence first and foremost, rather than radicalization. It is critical that we recognize that all children—former child soldiers, IDPs, refugees, and victims—who have been touched by warfare in Syria, Iraq, and elsewhere—even indirectly—are candidates for experiencing the neurological, psychological, and physical impacts of war. They have all been habituated to violent means of conflict resolution and, in the future, are more likely to turn to these destabilizing tactics, regardless of ideology or religious belief.