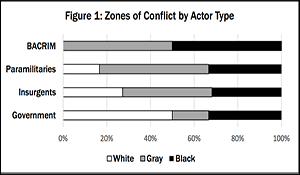 Demystifying Gray Zone Conflict: A Typology of Conflict Dyads and Instruments of Power in Colombia, Libya and Ukraine.

This report is part of START project, “Shadows of Violence: Empirical Assessments of Threats, Coercion and Gray Zones,” led by Amy Pate, Research Director at START.

This research was supported by a Centers of Excellence Supplemental award from the Department of Homeland Security’s Science and Technology Directorate’s Office of University Programs, with funding provided by the Strategic Multilayer Assessment (SMA) Branch of the Department of Defense through grand award number 2012ST061CS0001‐05 made to START. The views and conclusions contained in this document are those of the authors and should not be interpreted as necessarily representing the official policies, either expressed or implied, of the U.S. Department of Homeland Security, the U.S. Department of Defense or START.

“The Gray Zone is a conceptual space between peace and war, occurring when actors purposefully use multiple instruments of power to achieve political-security objectives with activities that are ambiguous or cloud attribution and exceed the threshold of ordinary competition, yet fall below the level of large-scale direct military conflict, and threaten US and allied interests by challenging, undermining, or violating international customs, norms, or laws.”

More specifically, extensive focus is directed to the role of the myriad, violent non‐state actors (VNSAs) present in each conflict. The case studies elucidate that given the confluence of a diverse array of actors and the seven distinct instruments of power (diplomatic, informational, military, economic, financial, intelligence and legal), which can be leveraged in prosecuting the conflict within White, Gray and/or Black domains, Gray Zone environments are particularly complex. Beyond merely illustrating this fact, the country reports are designed to help bound the scope for practitioners attempting to understand and possibly intervene in these dynamics. This is accomplished in two ways. First, we observed that actors of the same type largely behave comparably when facing the identical types of adversaries within the same conflict. Consequently, actors can be aggregated by types (e.g., treating various leftist insurgencies as a group or collapsing the myriad localized Islamist groups into a single category in Libya) without substantial loss of fidelity.

While the use of the aforementioned typology is helpful, the studies’ real innovation is that they focus on conflict dyads. Rather than consider the entire conflict – with its still numerous actor‐types – as a whole, these reports break down and analyze the conflict one dyadic configuration of belligerents at a time. We found that belligerents of the same type prioritize certain instruments and Zones when facing one type of actor and other instruments and Zones against other actor‐types. For example international legitimacy is very important for some types of VNSAs. Consequently, these groups may prioritize White and/or Gray diplomatic and informational instruments when confronting the government. However, Gray and/or Black Zone activities within the military instrument may predominate in their conflict with other VNSAs, since these dyads are less likely to affect international perceptions. The average Colombian conflict dyad involves just 2.5 of the seven instruments. In Libya, the average is a bit higher at 4.5 instruments. However, on average, just 2 are particularly salient. Ukraine similarly experiences an average of 4.5 relevant instruments of power across all dyads. Nevertheless, this average is inflated by the Ukrainian government versus Russian government dyad, which involves all seven instruments.

This report proceeds in four sections. The first section provides background on each case and the relevant actors therein. The subsequent section describes the data leveraged and the methodology employed by the studies. The penultimate section elaborates on the approach utilized and key findings. The final section concludes. In doing so it also offers advice for practitioners.