Disinformation and Political Warfare: Historical and Technological Insights (A Conversation with Thomas Rid) 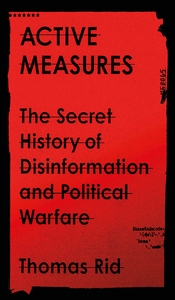 Dr. Rid began by stating that that there is currently a lack of understanding of how historical influence operations have contributed to the evolution of present day countries’ information operations. He argued that scholars cannot fully grasp 21st century cyber operations without understanding intelligence operations from the 20th century. He stated that his research showed that the exposure of information has developed asymmetrical features for the US and its adversaries, including how influence operations are technically carried out, how operators form their strategies, the ethical constraints faced by operators, and the evaluation of a message’s success.

Next, Dr. Rid began describing two Cold War influence operations. The first was an influence campaign carried out by the CIA in Eastern Berlin, which was designed to increase the appeal of US culture by using balloon drops, the distribution of pro-US leaflets, the use of radio spots, and the publication of magazines. Dr. Rid highlighted two magazines, a women’s magazine and a jazz magazine, both of which were designed to spread the US’s cultural appeal. He then commented that at this time in history, the CIA was effective at targeting fissures in the Soviet Union’s society.

Dr. Rid then presented his second example of a Cold War influence campaign. This example focused on the KGB’s release of stolen classified documents (that turned out to be forgeries) to newspapers—first in Norway, then in Germany. To increase the exposure and impact of the leaked information, the KGB forged a document that stated that the US Department of Defense had approved the use of low grade nuclear weapons in combat, which was then published in the Soviet sympathetic Stern magazine. In response, Der Spiegel, Stern‘s main competitor, ran stories exposing the KGB’s use of false information. The KGB used this exposure and dialogue to continue to release information, knowing that both magazines would publish it and create dialogue surrounding the information. Dr. Rid pointed out that this dialogue ultimately legitimized the false and sensational information. The KGB purposefully chose magazines as an outlet for information leaks, Dr. Rid explained, because magazines normally follow weaker journalistic standards and more easily allow information to gain mass circulation.

Dr. Rid concluded his presentation by stating that the strategies the CIA and the KGB used in their war of information still apply to influence operations today. However, new technology has increased the speed at which false information can be spread and countered. He argued that by 2013, the US had become adept at carrying out exposure operations, which could be seen through a trend of news sources exposing leaked or false information. The increasing number of instances relating to false information has led US companies and governments to become effective at creating accurate attribution reports for information. Dr. Rid believes that modern-day Russia does not have this same capability, which is partly because Russia has been focused on creating creating false information and undermining populations’ trust in western institutions.