Dominance in a Warfighting Domain Won’t Get Us There 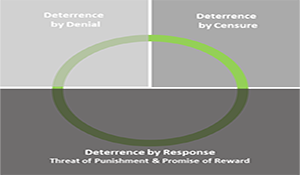 Dominance in a Warfighting Domain Won’t Get Us There: Thoughts on a Comprehensive Approach for Space Security.

Recent statements by senior national security space leaders dubbing space a “warfighting domain” and calling for US space superiority are not a sufficient foundation for achieving a stable security environment in space. In fact, as it appears now, the evolving US approach to space represents a textbook plan for escalating an arms race in space. A more comprehensive, three-part deterrence framework for space is suggested.

Over the next several decades, the US is likely to face a continuously evolving set of security challenges involving space. The good news is that US military superiority in the physical and digital domains seems to have raised the perceived cost of serious, direct military conflict with the US for Russia, China, and Iran among others. The not-so-good news is that US military dominance does not appear to have changed the security interests that lead to conflict with the US, but instead has pushed actors to change tactics to avoid open warfare with the US while continuing to pursue security objectives by other means. It is in this context of conflict short of warfare—what some have called the “gray zone”2—that the national security establishment frequently finds itself. Space is a vast yet crowded domain where operational challenges are exacerbated by the increasing prevalence of dual-use commercial-military technologies, and the difficulty of maintaining reliable situational awareness. It is perhaps the ultimate gray zone.

In response to the increase in space-based and counterspace activities among potential US adversaries, senior national security space (NSS) leaders have embarked on a public campaign of statements, interviews, conferences, and per newly customary political communications—Tweets, to signal a shift in the way that the US looks at space security. What was previously regarded as a sparsely-populated domain in which the US enjoyed overwhelming superiority, has in the past year or so been described as a crowded, contested “warfighting domain.” Air Force Secretary, Heather Wilson, and senior Air Force leaders recently made this point to Congress, arguing that—as in the air domain—the strategic imperative in space is to achieve superiority and dominance by defensive means or, if necessary, by attack.

The suggestion is that the US concept of the threat environment in space is continuing to evolve from one requiring that critical space systems have adequate defenses and that space services are resilient to interruption, to one that includes use of preemptive and kinetic action against adversary space capabilities that threaten our own. In other words, constructs such as deterrence and warfighting that are engrained in US strategic thinking about other domains, should be considered just as essential for space. If this is the case, the question becomes: Does identifying space as a “warfighting domain” and working/spending toward US space superiority constitute a sufficient foundation for sustainable and security in space?