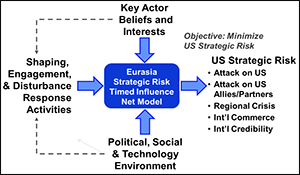 The GMU Eurasia Strategic Risk project examined future political, security, societal and economic trends as they apply to the decision calculus of key Eurasian regional actors. Timed Influence Net (TIN) models were used to identify potential sources of strategic risk for the United States by focusing on actions and behaviors that would be considered adverse by the United States, NATO, and other U.S. partner nations. The goal was to provide planners with a tool that can be used to inform their discussions with military and non-military staffs from both the United States and its partners on potential Eurasia strategies. Among the key observations: When the adverse behaviors the United States seeks to influence are not related to a perceived existential threat to a NATO member, classical deterrence cost-benefit calculations lose importance. However, Russia’s perceived cost-benefit calculations of not acting, and its perception of the decision calculus of the United States and its partners remain important considerations. For this reason, the study concludes that NATO’s Article V will continue to serve as an effective deterrent to actions which the Alliance believes constitute an existential threat to a member country, but is less likely to deter attacks that do not jeopardize a member state’s existence because the political cost of restraint for Russia outweighs the potential cost of a likely NATO response.

NATO’s Article V will continue to serve as an effective deterrent to actions which the Alliance believes constitute an existential threat to a member country, but is less likely to deter attacks that do not jeopardize a member state’s existence: the political cost of restraint outweighs the potential cost of a likely NATO response. However, NATO can favorably influence Russia’s decision calculus for adverse behaviors that do not constitute existential threats by focusing on (1) reducing the cost (and increasing the benefit) of exercising restraint, and (2) altering Russia’s perception of the US/NATO decision calculus so that it does not assess that it must act to preempt US and NATO actions during periods of instability.

The US and NATO can influence Russia’s view of its strategic deterrence posture by using all the levers influencing the Russian strategic posture decision calculus: Increase perceived cost of action (punishment), reduce perception that Russia will benefit from the action, reduce perceived cost of restraint, increase perceived benefit of restraint, and positively influence the Russian perception of United States and NATO objectives in a crisis.

Since the Russian narrative implies that the West will exploit every opportunity to reduce Russian power and status, the United States should avoid behaviors and discourage partner actions that support the anti-Russian narrative. De-escalation of a potential crisis becomes increasingly difficult once the Russian leadership rallies the Russian electorate and their partners outside Russia; therefore, where possible, the United States should focus on Russia’s perceived costs and benefits of exercising restraint when assessing ways to motivate Russian actions to reduce US strategic risk in the EUCOM AOR.

Although the study did not conduct experimentation on the potential for theater engagement and security cooperation to reduce potential strategic risk in the EUCOM AOR, it seems clear that it will be extremely difficult to alter Russian core beliefs regarding the motives of the United States and NATO with respect to its power and international prestige. The United States is capable of influencing the attitudes and behaviors of other regional actors, to include former Russian clients, through its shaping and engagement activities. These attitudes and behaviors become important when regional stability is disturbed and responses to the disturbance are implemented. It is important for all pertinent parties to avoid activities reinforcing the Russian narrative that believes the United States and its allies will exploit every opportunity to diminish Russian power and status.