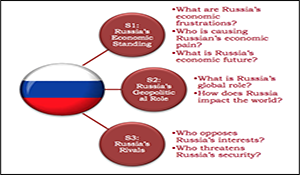 This study sought to examine future political, security, societal and economic trends to identify where U.S. interests are in cooperation or conflict with Russian interests, and in particular, identify leverage points when dealing with Russia in a global context.

USEUCOM requested that the SMA team initiate an effort to provide the Command analytical capability to identify emerging Russian threats and opportunities in Eurasia. The study sought to examine future political, security, societal and economic trends to identify where U.S. interests are in cooperation or conflict with Russian interests, and in particular, identify leverage points when dealing with Russia in a “global context.” In order to provide insight into these questions, this report conducted a cross-platform media analysis of Russian language media to discover emerging geopolitical threats and opportunities. This joint study was completed by researchers at Texas A&M University, University of Alabama, and Mississippi State University using the Multi-media Monitoring System (M3S) at Texas A&M University.

Media, in numerous formats, has an inordinately large role in shaping and conditioning public opinion, as well as in social organization and mobilization. Recent media in Russia reflects a deterioration of relations with the West, and seems to be contributing to a general distrust of the West among Russian citizens. This distrust is not just expressed in international politics, but in the everyday lives of many Russian citizens, leading to a palpable change in their relations with Westerners. This study sought to investigate the contours of the Russian geopolitical worldview by a close analysis of a diverse array of media sources, to determine the key narratives driving perceptions of Russia’s current economic status, its role in geopolitical relations, and its rivalry with the West.

In order to better understand the dynamics of foreign policy decision-making by the leadership of Russia, this study analyzed Russian language media (broadcast and web) to understand key frames and cultural scripts that are likely to shape potential Russian political beliefs and attitudes. Three separate studies were conducted. The first focused on Russian media coverage of economic issues. The second examined Russian multilateral engagement. The third looked at Russian media portrayals of NATO. The studies covered several months of media reports from web-based news sites, journals, and commentary, as well as broadcasts from the state-owned broadcaster Rossiya 24. Altogether, the researchers monitored over 2,500 news items from fourteen different news sources.