Harnessing David and Goliath: A Compound Approach to the Great Game 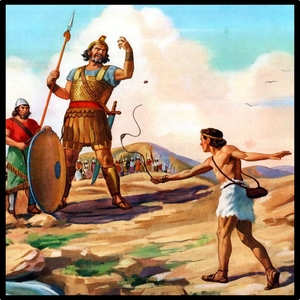 “Harnessing David and Goliath: A Compound Approach to the Great Game”

SMA hosted a speaker session presented by COL Montgomery Erfourth (USSOCOM J51) and Mr. Ryan Oliver (USSOCOM J51) as a part of its Future of Great Power Competition & Conflict Speaker Series. COL Erfourth began the presentation by stating that competition below the level of armed conflict has not been discussed much in recent strategic planning documents; therefore, USSOCOM J51 decided to take a theoretic approach to assess what tactics below the level of armed force the US may use in future scenarios, as well as what threatens US interests. Mr. Ryan Oliver then explained that his team looked at the 2019 National Security Strategy (NSS) and National Defense Strategy (NDS) to assess: “What are we competing for, and how do we compete in this space?” He discussed the central theme that arose during this assessment: the Biblical story of David and Goliath. He explained that the problem his team identified is that the US approach to mitigating conflicts resembles Goliath (using its size, strength, and power to its advantage, while also using intimidation and deterrence tactics), while its rivals are starting to adopt approaches resembling David (using their agility, precision, and an eye for vulnerability and opportunity to their advantage). The proposal, therefore, is for the US to “adapt to complement Goliath qualities with David capabilities in a compound approach,” he explained. Mr. Oliver then described the strategic environment and how he and his team aimed to look through the lenses of decision makers. He defined important terms, including competition, geopolitical competition, influence, leverage, and advantage. He then provided a series of competitive deterrent, punitive, and proactive options short of war, focusing on proactive options. Mr. Oliver also laid out some further factors to consider when looking at competition, including political will and risk, potential consequences, ethical and legal considerations, and engagement discipline. To conclude, Mr. Oliver posed several questions for further exploration and summarized USSOCOM J51’s proposed compound approach.