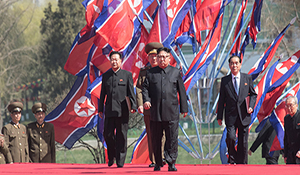 [Q5] How does the US, working with its partners, best contest DPRK operations?

This report summarizes the input of 15 insightful responses from the Korea Strategic Outcomes Virtual Think Tank (ViTTa) expert contributors. While this summary response presents an overview of the key expert contributor insights, the summary alone cannot fully convey the fine detail of the contributor inputs provided, each of which is worth reading in its entirety. For this report, the expert contributors consider how the US can work with its partners to contest DPRK operations. This summary details the various approaches that emerge.

The four additional approaches are:

The most frequently cited way in which the US and its partners can effectively contest DPRK operations is with multilateral engagement.2 Contributors that advocate this approach highlight the advantages of strong multilateral alliances and partnerships for advancing US interests vis-à-vis the DPRK. Ariel F.W. Petrovics of the University of California, Davis offers a broad reflection of this approach, assessing that a multilateral regional engagement strategy, particularly one that “integrates persistent cooperative efforts with direct negotiations,” best positions the US to contest and overcome DPRK operations that run counter to US interests, and may “offer tangible benefits that simultaneously provide pathways for developing future leverage over Pyongyang.” Petrovics notes that the DPRK has historically been more receptive to sustained engagements that necessitate repeated cooperative interaction, while attempts at coercion have primarily generated hostility.3 There is also a clear lack of trust between the key regional actors with interests on the Korean Peninsula. Taken together, these factors suggest that a multilateral approach to engagement is likely to be more successful than a bilateral engagement approach when dealing with the DPRK. Petrovics explains that, “when trust between the necessary players is very low—as is the case with North Korean negotiations—engagement has the best chances of success when executed through a multilateral framework.” The prevailing absence of trust may also mean that multilateral engagement is most likely to be successful if participants can agree to delegate negotiating oversight and enforcement powers to an agreeable third party.

Several contributors echo this assessment, but advance it a step further, highlighting the value of a cohesive US-ROK-Japan trilateral alliance for effectively contesting DPRK operations. Dr. Patrick McEachern of the Wilson Center highlights the benefit of the three countries working together, explaining that “the most effective and seamless responses to DPRK operations benefit from the national capabilities of all three states.” While long-standing and deep-rooted South Korean distrust of Japan has served as a barrier to advancing the cohesion of the ROK-Japan bilateral and US-ROK-Japan trilateral alliances,5 the current situation on the Korean Peninsula may present an opportunity for the ROK and Japan to overcome some of their differences to expand cooperation in light of a common threat.6 Prioritizing a cohesive US-ROK-Japan trilateral approach may position the US to effectively contest DRPK operations; the same, however, cannot be said about prioritizing a US-China bilateral approach. Though the latter may be tempting, McEachern contends that it would be “an example of a tactical approach that loses sight of the strategic importance of prioritizing the allies.”7 While China certainly plays an important role on the peninsula, the US should not overlook the misalignment of US and Chinese values and interests.8 Attempting to contest DPRK operations by way of a US-China bilateral approach alone, therefore, may not be the best approach for the US to achieve an outcome that is in line with its interests. Rather, contributors agree that the US will be better enabled to effectively contest DPRK operations if it operates according to a fundamental guiding principle of “allies first.”

The second most frequently cited way in which the US and its partners can effectively contest DPRK operations is by strengthening US-ROK-Japan trilateral military and defense cooperation and commitment.10 Yun Sun of the Stimson Center and Dr. William Tow of Australian National University both highlight the importance of enduring US military and defense commitment, stressing that the US “needs to remain steadfast in its efforts to coordinate its regional defense and security policies with its South Korean and Japanese allies”11 and “provide unswerving, consistent commitment to the defense of [both countries].”12 Not doing so, Tow contends, could increase the likelihood of regional instability.

Contributors specifically underscore the critical role that the US plays with respect to deterrence and stability on the Korean Peninsula and in the region more broadly. The US maintains significant levels of troops in both the ROK and Japan,13 and its commitment to the defense of both countries is central to ensuring stability in the region. US deterrence capability is also central to contesting DPRK operations.14 However, while US-ROK-Japan military and defense cooperation and commitment has continued to deepen,15 McEachern contends that “much work remains to be done.” Dr. Sheila Smith of the Council on Foreign Relations echoes McEachern’s sentiment, highlighting several vulnerabilities that currently challenge the US-ROK-Japan alliance. These vulnerabilities include the missile threat to Japan,16 the lack of trust between the ROK and Japan,17 the need for the US and Japanese militaries to address how they will fight together, and the need for a broader understanding between the US and Japan on how to operationalize Article Five protections in the US-Japan Treaty of Mutual Cooperation.

Ultimately, contributors that advocate strengthening US-ROK-Japan security relations as the preferred approach for contesting DPRK operations generally echo Tow’s assertion that “there should be no visible let-up in the scale or tempo of [US-ROK-Japan] defense cooperation.” Moreover, these contributors also identify several potential opportunities for advancing US-ROK-Japan military and defense cooperation efforts in the interest of contesting DPRK operations, including:

“Cooperate” Rather Than “Contest”

The third most frequently cited way in which the US and its partners can effectively contest DPRK operations is, in fact, by not contesting the DPRK but instead cooperating with it to build mutual trust.25 Contributors that advocate this approach challenge the premise of the original question, arguing instead that the US would be better off if it started focusing on cooperating with the DPRK. Dr. Gregory Kulacki of the Union of Concerned Scientists emphasizes this point, asserting that “this is not a constructive question. If you view the US and allied role as contesting, rather than cooperating with the DPRK, it will undermine efforts to build the mutual trust necessary to resolve the root causes of the DPRK’s drive to acquire nuclear weapons and maintain a robust and threatening military posture.”

Contributors that endorse cooperation over contestation as the preferred approach generally assess that by altering the adversarial nature of the US-DPRK relationship (i.e., stop contesting), relations between the two countries could begin to normalize and the motivations that have driven the DPRK’s antagonistic and threatening operations could start to dissipate as a result.26 In this scenario, developing mutual trust between the US and DPRK is important. Focusing on getting to know the DPRK better and creating opportunities for the DPRK to become less limited in what it can do (e.g., assist the DPRK in developing alternatives to weapons sales) will go a long way toward building mutual trust and advancing cooperative relations.27 Ultimately, as Ken Gause of CNA proposes, “we can continue the endless game of whack-a-mole or we can begin to think differently about North Korea. Not as an adversary, but as an opportunity.”