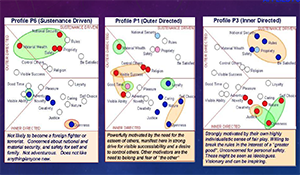 Christine MacNulty has forty years experience as a consultant in long-term strategic -planning for concepts as well as organizations, futures studies, foresight, and technology forecasting, technology assessment and related areas, as well as socio-cultural change. For the last twenty years, most of her consultancy has been conducted for the Department of Defense, including: The Joint Staff, OSD (OFT), the DON (Under Secretary, Secretariat, OPNAV N3/N5, N6, N7, CNET, NAVSEA, NAVSPECWARCOM, ONR, CNO’s SSG), the USMC (HQMC – Commandant), the USCG (HQ – Commandant), the USA (SMDC), JTAMDO, (then) BMDO, USSOCOM, (then) USACOM, JFCOM J9, and other COCOMs. She has also conducted projects for NATO ACT and NATO NEC, the British Army’s Force Development & Training Command, and the German BBK.

During the last thirty-five years Christine MacNulty has contributed methods and models for understanding social and cultural change. She developed the European version of SRI International’s Values & Lifestyles Program, and worked with the International Research Institute on Social Change to develop their social models. In the last twelve years she has applied her knowledge of strategy, cultures and cognition to “understanding adversaries” – using that information for planning and assessing non-traditional operations, information warfare, information operations, and strategic communication. She has also used these social models for training in network-centric operations and C2.

She was elected a Fellow of the Royal Society of Arts, Manufactures and Commerce in 1988 for her contribution to British industry. She is the coauthor of two books: Industrial Applications of Technology Forecasting, Wiley, 1971 and Strategy with Passion – A Leader’s Guide to Exploiting the Future, to be published in 07/2016. Her paper: “Method for minimizing the negative consequences of nth order effects in strategic communication actions and inactions” was published in NATO Defence Strategic Communications Journal, p 99, Winter 2015. Her monograph “Truth, Perception & Consequences” was published by the Army War College, 09/2007, and “Transformation: From the Outside In or the Inside Out” was also published by the Army War College in 09/2008. Her paper, Perceptions, Values & Motivations in Cyberspace appeared in the IO Journal, 10/03/2009, and The Value of Values for IO, SC & Intel was published in the 08/2010 edition of the IO Journal.