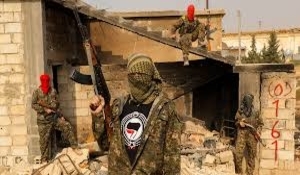 Speakers: Braniff, B. (National Consortium for the Study of Terrorism and Responses to Terrorism (START) at the University of Maryland); Gartenstein-Ross, D. (Valens Global); Kuznar, L. (NSI, Inc.); Ligon, G. (University of Nebraska at Omaha)

SMA hosted a panel discussion as a part of its SMA CENTCOM Speaker Series. The panelists included Dr. Lawrence Kuznar (NSI, Inc.), Dr. Gina Ligon (University of Nebraska at Omaha), Mr. William Braniff (National Consortium for the Study of Terrorism and Responses to Terrorism (START) at the University of Maryland), and Dr. Daveed Gartenstein-Ross (Valens Global).

Dr. Kuznar first discussed what most western decision makers, journalists, pundits, and scholars got wrong about ISIS: 1) the fundamentals regarding ISIS’s idea of a caliphate, 2) that ISIS was an organization without the capacity to sustain itself, and 3) that ISIS was not religious. He then elaborated on how characterizing ISIS as not religious was a mistake and how ISIS’s “end times “narrative was compelling to many followers and recruits. To conclude, Dr. Kuznar discussed the significance of recent events, highlighting ISIS’s decision to stick with its caliphate narrative as it named its new successor, Abu Ibrahim al-Hashimi al-Qurayshi, and the potential pros and cons of ISIS’s decision to stick with this narrative. Mr. Braniff then explained how ISIS is taking advantage of the road that Al Qaeda has paved over its 31 year history. Moreover, he highlighted the amount of terrorist movements spread across the globe and how each has a leader, a set of grievances to exploit, and territory that it wants to gain; however, no one knows which movement will become the next big threat. To conclude, Mr. Braniff presented several X factors (i.e., inter and intrastate conflicts, Ayman al-Zawahiri’s death, end-to-end encrypted platforms) and a series of recommendations as to what the US government should put its resources towards (i.e., conflict zones, locations of geo-strategic value, places with Al Qaeda/ISIS co-location, places with internecine fault-lines for ISIS to hijack). During her portion of the discussion, Dr. Ligon touched on ISIS’s past, highlighting that the group developed resources and capabilities that differentiated it from other violent extremist organizations (VEOs) and that it stood out as being strategically strong. She also discussed ISIS’s organizational structure and how it continues to evolve. She then spoke about present-day ISIS, while focusing on what happens to organizations that lose a leader. To conclude, Dr. Ligon discussed the future of ISIS and theorized that its top management team will become distrustful of each other and stop talking to each other, allowing the middle layer to gain power. She also suggested that there may be a period of instability and decreased attack sophistication. Dr. Gartenstein-Ross proceeded to discuss how subject matter experts (SMEs) can avoid groupthink when examining a topic such as ISIS. He explained that there is often punishment for being right and praise for being wrong in academia and stressed the importance of listening to non-majority and non-consensus viewpoints. By allowing these individuals to join the discussion, the right environment for a stronger, more accurate, more useful conversation can be cultivated. To conclude, he provided a series of comments directed towards dissenting SMEs, the customers utilizing SMEs, and majority SMEs.