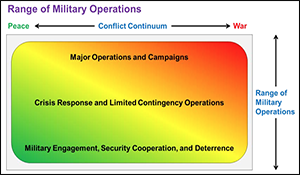 The Joint Concept for Human Aspects of Military Operations (JC-HAMO) describes how the Joint Force will enhance operations by impacting the will and influencing the decision making of relevant actors in the environment, shaping their behavior, both active and passive, in a manner that is consistent with U.S. objectives.1 Human aspects are the interactions among humans and between humans and the environment that influence decisions. To be effective at these interactions, the Joint Force must analyze and understand the social, cultural, physical, informational, and psychological elements that influence behavior. Actors perceive these elements over time, mindful of seasons and historical events, and with people having differing notions regarding the passage of time. Relevant actors include individuals, groups, and populations whose behavior has the potential to substantially help or hinder the success of a particular campaign, operation, or tactical action. Relevant actors may include, depending on the particular situation, governments at the national and sub-national levels; state security forces, paramilitary groups, and militias; non-state armed groups; local political, tribal, religious, civil society, media, and business figures; diaspora communities; and global/regional intergovernmental and non-governmental organizations.

Military efforts in the recent past have produced many tactical and operational gains, but rarely achieved desired political objectives and enduring outcomes in an efficient, timely, and effective manner. The elusiveness of success, despite unmatched U.S. conventional combat capabilities, highlights that militarily defeating adversary forces, in and of itself, does not automatically achieve strategic objectives.

Recent failure to translate military gains into strategic success reflects, to some extent, the Joint Force’s tendency to focus primarily on affecting the material capabilities—including hardware and personnel—of adversaries and friends, rather than their will to develop and employ those capabilities. The ability to destroy the material capabilities of adversaries and strengthen those of friends has always been, and will continue to be, critical. However, military operations are most effective when they induce or compel relevant actors to behave in a manner favorable to the United States and its partners.

The human aspects of military operations are critical considerations in traditional and irregular warfare. Thus, JC-HAMO re-focuses the Joint Force on understanding relevant actor motivations and the underpinnings of their will, and developing and executing more effective operations based on these insights. The consideration of the human aspects of military operations is central to various forms of strategic competition and all Joint Force operations. A failure to grasp human aspects can, and often will, result in a prolonged struggle and an inability to achieve strategic goals. With insightful analysis, the Joint Force can identify opportunities for collaboration and discern weaknesses and exploit divisions among adversaries.

Enhancing the Joint Force’s ability to conduct military operations, which have the required impact on the will and decision making of relevant actors, demands a detailed understanding and consideration of the human aspects of military operations. This understanding and consideration is critical during the planning, directing, monitoring, and assessing of operations. It is also vital to the provision of military advice to policymakers. To accomplish these efforts, the JC-HAMO identifies the following four imperatives that are instrumental to inculcating in the Joint Force an updated mindset and approach to operations:

These imperatives apply to all facets of the National Military Strategy and all the primary missions of the U.S. Armed Forces, as outlined in the Defense Strategic Guidance, Sustaining U.S. Global Leadership: Priorities for 21st Century Defense. These imperatives pertain to the full range of military operations (ROMO) and the entire conflict continuum.

A critical objective of the JC-HAMO is to improve decision making and the application of operational art and design by Joint Force members. The goal is not to advocate for a separate line-of-effort or a new occupational specialty dedicated to the human aspects of military operations, although access to regional specialists, social and cultural anthropologists, and other technical experts is important. Rather, the aim is to elevate the performance of the entire Joint Force. As a human aspects core competency takes hold and matures over time, it will generate a broad range of knowledge, skills, and abilities—sustained via a learning continuum—that will enable the Joint Force to improve its strategic competence and aptitude to contribute to the achievement of national policy objectives.