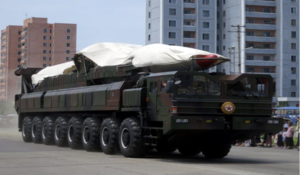 Kim Jong Un’s Worldview and Perspectives on Space: An Analysis of Public Discourse

A collection of Kim Jong Un’s speeches from 2012 to 2017, translated and published online by the Democratic People’s Republic of Korea (DPRK) were examined using semi-automated discourse analysis to gauge Kim Jong Un’s concerns in the space domain and how these concerns are articulated with general political and cultural themes. The primary findings from the discourse are presented as the DPRK’s (i.e., Kim Jong Un’s) perspectives and worldview with respect to the space domain and general themes.

Kim Jong Un’s Perspectives and Worldview Regarding the Space Domain

• The DPRK’s space operations are described in Kim’s speeches in entirely martial and threatening terms and the need to deter aggression.

• Kim Jong Un discusses the DPRK’s space endeavors within the framework of national security rather a commercial perspective.

• Space events, such as missile launches and satellite deployments, and space discourse are associated with negative themes such as danger, threat, instability, adversaries, and nuclear weapons.

• The US and the DPRK are frequently mentioned together when Kim Jong Un discusses space, and in association with actual space events. President Trump is highly associated with space discourse and space events in Kim Jong Un’s discourse. This may indicate that Kim Jong Un values the space domain as a critical venture to counter U.S. ambitions.

• The frequency of space themes and actual space events escalate through time, indicating that both Kim Jong Un’s rhetoric and action track with one another.

• Kim Jong Un’s language regarding space is highly charged and negative, especially in speeches where he mentions President Trump.

• Despite increases in missile testing over the coding period, missiles and military are not often mentioned in Kim’s discourse. However, satellites are mentioned, and are associated with success, authority, legitimacy and economic development. These associations must be understood in the framework of national security, and economic development is only pursued insofar as to serve the interests of bolstering regime survival.

• The most common themes include Juche philosophy, and Kim Jong Un’s predecessors, Kim Il Sung and Kim Jong Il, emphasizing the importance of the legacy of the Kim family. Other frequently mentioned themes are related to the DPRK’s strength and ability.

• The analysis suggests that Kim Jong Un is most concerned with his adversaries, namely, the US, Japan and South Korea.

• The US and the DPRK share close associations with many themes as a reflection of the adversarial relationship Kim Jong Un sees between the U.S. and the DPRK. These themes are largely negative and similar to themes associated with space, including instability, injustice, danger, threat, extremely negative themes and hyperbole, war, and adversaries.

• The occurrence of only a few themes increase over the 5-year coding period for this study, namely: space, Trump, the US and danger.

• Space themes, President Trump, the U.S. and danger are the only themes that increase through time, and all these themes have accelerated in the past two years.