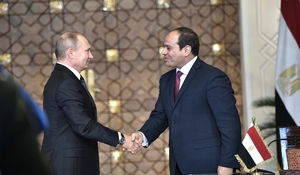 This study examined Egyptian, Russian, and Chinese media perspectives of the Egyptian economy to determine to what extent a future economic crisis in Egypt is probable, and identification of which great powers would most likely lead bailout efforts should an economic crisis unfold. To answer these questions, researchers employed a mixed-method approach analyzing over 500 news articles from the past five years from 18 different Egyptian, Chinese, and Russian native language news sites.

Stability of the Egyptian Economy

Russian and Chinese Interests in Egypt