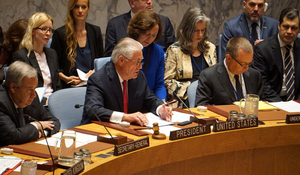 [Q3] Under what regional and domestic political, economic, and social conditions would it be possible to achieve final, fully verified denuclearization (FFVD) of the DPRK without resorting to militarized conflict (i.e., what conditions would have had to occur to make that possible)?

This report summarizes the input of thirty responses from the Korea Strategic Outcomes Virtual Think Tank (ViTTa) expert contributors. While this summary response presents an overview of the key expert contributor insights, the summary alone cannot fully convey the fine detail of the contributor inputs provided, each of which is worth reading in its entirety. For this report, the expert contributors consider what regional and domestic political, economic, and social conditions are necessary for achieving final, fully verified denuclearization (FFVD) of the Democratic People’s Republic of Korea (DPRK) without resorting to militarized conflict. This summary details the various conditions that emerge. The insuperable odds of achieving FFVD is a point highlighted by a majority of the contributors, with several contributors expressing significant doubt that a denuclearized DPRK is possible at all. At best, contributors suggest, true progress towards achieving FFVD will require a long-term perspective, modified expectations, and a measured approach; however, even this does not ensure success. Nevertheless, the approach and order of conditions may matter more than the conditions themselves.

Setting the Stage and Changing the Outlook

In considering necessary conditions for achieving FFVD, contributorsset the stage by reviewing the DPRK’s motivations for its nuclear weapons program. The prestige of being a nuclear power is certainly important to the Kim regime and the people of the DPRK, but it also helps to ensure the regime’s hold on governing power and control, while also playing to its Juche ideology. Nuclear capability provides the DPRK with security and deterrent capability against potential threats to its sovereignty from outside forces, leverage over other international actors (particularly the ROK), and relevancy and legitimacy on the international stage.

In reflecting on the motivations behind the DPRK’s nuclear weapons program, several contributors offer necessary conditions for achieving FFVD that are more akin to perspective or ideological shifts, rather than on-the-ground requisites. These shifts, contributors stress, are compulsory conditions to having any chance of achieving FFVD.

Contributors who advocate for perspective shifts as being a necessary condition for achieving FFVD emphasize that, in order for any credible steps towards DPRK denuclearization to occur, the key actors involved have to work towards establishing and building mutual trust. Currently, there is a severe lack of trust among the key actors, and this lack of trust, contributors suggest, is a major impediment to the perspective shifts and on-the-ground conditions needed for true progress towards achieving FFVD. Overcoming this impediment, however, may not be easy, as there appears to be little reason (if any at all) currently for the DPRK and the US to trust each other. Thus, as the situation stands currently, the US would have to take substantial risk in trusting any DRPK commitment to FFVD and, at the same time, would have to offer serious reassurances and/or binding agreements to appease the DPRK’s distrust of the US and its true intentions relating to FFVD. Even such reassurances, however, may not be enough given recent US precedent. Dr. Todd Robinson of the Air Command and Staff College, for example, argues that “the US’ withdrawal from the JCPOA was a colossal strategic mistake that might ultimately make an agreement with the DPRK impossible, as it suggests that a state might do exactly what it is required to do under the terms of whatever agreement is made and the US might simply renege on its end of the bargain because it feels like it.”

In addition to the need to overcome an absence of mutual trust, the key actors involved in the DPRK denuclearization process may also have to adjust their existing perspectives and ideologies. Achieving FFVD without resorting to militarized conflict, contributors suggest, will require a shift in the way in which the DPRK thinks about nuclear weapons. More specifically, the Kim regime will have to accept that the security of the regime, sovereignty and territorial integrity of the country, and international prestige of Kim Jong-un and the DPRK would not be harmed—and may actually be increased—without nuclear weapons. Essentially, contributors explain, the DPRK would have to be convinced that there is no threat against the state and, therefore, there is no need for nuclear weapons. If such a shift in the DPRK perspective were to occur, it would likely increase the possibility of FFVD being achieved. This appears to be particularly true, contributors suggest, if the DPRK perspective were to start shifting towards perceiving economic power as being more important than nuclear power, as a more economically-focused mindset may drive the regime towards exchanging nuclear capability for economic opportunity and normalized relations with the international community. Ultimately, however, this type of shift in perspective would require the DPRK to fundamentally change its worldview and raison d’être.

The US may also have to shift the way in which it thinks about the DPRK and denuclearization, including potentially making exceptions to previously held expectations and redlines, in order to achieve FFVD. Achieving FFVD without resorting to militarized conflict, contributors contend, may require the US to take a new approach to the DPRK, specifically one in which the US starts to accept and recognize the DPRK and the Kim regime on the international stage. Such a shift in the US perspective may be a particularly impactful move toward achieving FFVD, Dr. Justin Hastings of the University of Sydney suggests, especially if this US acceptance of the DPRK includes a loosening of restrictions on DPRK economic activity and if the US itself commits to economic investment with the DPRK.

Beyond the need for mutual trust and new perspectives discussed above, contributors also highlight several more on-the-ground conditions that may be conducive to achieving FFVD in the DPRK without resorting to militarized conflict. The lists below summarize the political, economic, and social conditions most commonly cited by contributors. With thirty contributors offering conditions, however, the list of ideas is extensive, with some conditions directly contradicting others.

The US and China cooperate on the DPRK:

The US and China do not cooperate on the DPRK:

Reduced Tension on the Korean Peninsula

What is the Best Approach to Achieving FFVD?

The insuperable odds of achieving FFVD without resorting to militarized conflict is a point that is echoed in nearly every contributor response. Not surprisingly, therefore, contributors emphasize the importance of carefully considering the approach that is taken towards achieving FFVD on the Korean Peninsula. In fact, the approach and order of conditions may matter more than the conditions themselves. Contributors are generally definitive, however, in the view that FFVD should be viewed as a long-term objective that requires a measured approach. Such an approach, contributors explain, must allow the key actors involved ample time to build and establish mutual trust—a fundamental element of any approach to peaceful denuclearization. To help build this trust among key actors, contributors suggest, the US and its regional allies must implement a clearly devised and projected set of executable policies.

As such, contributors reflect on what they envision to be the best approach to achieving FFVD without resorting to militarized conflict, presenting several options for consideration. Dr. Stephen Cimbala of Penn State Brandywine and Dr. Matthew Fuhrmann of Texas A&M favor a phased approach in which parties work together to implement a defined set of conditions over time (i.e., limits on testing and missile production, increases in DPRK-ROK joint military exchanges, progression towards regional agreements on cooperative threat reduction measures) rather than immediately pushing for denuclearization. Dr. Andrew O’Neil of Griffith University offers a “strategic trust” approach, pointing to US-Soviet arms control process as a potential model. Jenny Town of the Stimson Center advances an approach in which the US extends political concessions and commitments early on to consider what the DPRK is willing to do and how far it is willing to progress towards FFVD. Offering these kinds of commitments up front, she believes, could fuel more advanced negotiations later in the process. Finally Dr. Jeffrey Knopf of the Middlebury Institute of International Studies highlights the importance of sequencing in any approach to achieving FFVD, arguing that granting the DPRK its “ultimate carrot” (i.e., diplomatic recognition)should be the final step in the process, given only once there is confidence that FFVD has indeed been achieved.

Other contributors advocate for an approach that incorporate elements of both punishment and reward. Dr. Rupal Mehta of the University of Nebraska, Lincoln offers an “ad-hoc carrots and sticks” approach that combines a punishments pathway (e.g., targeted sanctions—particularly against the DPRK military—and cyber intervention) with a parallel rewards pathway (e.g., regional economic incentives and financial assistance, particularly from China). Hastings considers a three-phased approach that combines Chinese pressure, US guarantees, and DPRK compensation (i.e., China exerts economic pressure on the DPRK to begin denuclearization efforts and stay on a pathway toward denuclearization, the US provides security and economic guarantees to the DPRK, and the DPRK denuclearizes and shares the economic benefits it receives for doing so with its military and entrepreneurial elite).

Finally, some contributors advocate for an approach that is more focused on internal, domestic DPRK dynamics. For example, Town posits that the best approach may be one that allows Kim Jong-un to present himself as a hero to his people, which, she suggests, may embolden him to choose a new, nonnuclear path. Dr. James Platte of the United States Air Force Center for Strategic Deterrence Studies suggests that an approach focused on reunifying the peninsula under Seoul’s leadership is likely the approach that is most certain to achieve FFVD. He reminds us, however, that there can be no guarantees that such an approach would not resort to militarized conflict. Therefore, he advocates for an approach that combines implementing robust economic sanctions and launching an information campaign to erode the regime’s domestic governing power and support. A prolonged erosion of the regime’s power and support, he believes, could eventually compel change.

Ultimately, it is unclear that any approach could truly achieve FFVD on the Korean Peninsula. The best outcome for the US, therefore, may include living with a de facto nuclear DPRK, an improved relationship with the hostile state, and acceptance of the DPRK into the international community. What does seem clear, however, is that in order for progress to be made toward achieving FFVD in the DPRK, major shifts in perspectives and expectations are needed on all sides.