On Critical Thinking: It Takes Habits of Mind and Patterns of Inquiry 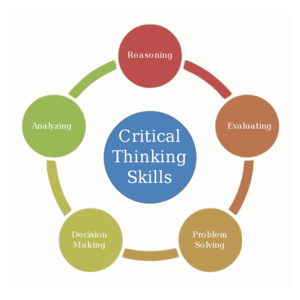 “On Critical Thinking: It Takes Habits of Mind and Patterns of Inquiry”

SMA hosted a speaker session presented by Dr. Stephen Wright (US Air Force (USAF) Air Education and Training Command) as a part of its SMA General Speaker Series. During his brief, Dr. Wright discussed the importance of looking to the future and creating critical thinkers. Those within the US Air Force and DOD writ large tend to think with a STEM (science, technology, engineering, and math) mindset. Consequently, they devolve straight into fixing or answering the problem, without considering the context of the problem itself. While the US Air Force and DOD need linear and abstract thinkers, they need them to be critical thinkers. Many courses on developing critical thinking skills focus on what to do, and with regards to testing, students learn how to take that test specifically, rather than actual critical thinking skills that can be applied to any test. These standardized tests only test your brain in certain ways and completely disregard several other ways of thinking, according to Dr. Wright. The question US decision makers need to ask is not what to do, but who can do it. Dr. Wright then used SpaceX as an illustrative example. Although the company looked for top engineering students, it also looked for applicants who were created pinewood derby cars or built robots or participated in engineering competitions in college. Dr. Wright suggests that to look for the “who,” US decision makers shouldn’t have applicants take a test, but rather ask them questions that reveal more about that individual, such as “What music do you listen to?”, “What books did you read last year?”, and “What journals or magazines do you read?” In other words, one should ask questions in order to find the insatiably curious. Critical thinking is a path, not a destination. Furthermore, Dr. Wright argued that it is vital for students to develop their own understanding of their patterns of inquiry. Students must be taught to scope a problem and determine how they will be able to handle and resolve their challenges in the future, depending on their future resources. However, Dr. Wright acknowledged that staying on this path is difficult. He concluded by stating that, after studying how to be a critical thinker, it is up to the individual to maintain that level of curiosity.