Operating in the Human Domain 1.0 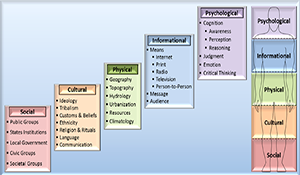 Operating in the Human Domain 1.0.

Building on the vision of USSOCOM strategic guidance documents, the Operating in the Human Domain (OHD) Concept describes the mindset and approaches that are necessary to achieve strategic ends and create enduring effects in the current and future environment. The Human Domain consists of the people (individuals, groups, and populations) in the environment, including their perceptions, decision-making, and behavior. Success in the Human Domain depends on an understanding of, and competency in, the social, cultural, physical, informational, and psychological elements that influence human behavior.2 Operations in the Human Domain strengthen the resolve, commitment, and capability of partners; earn the support of neutral actors in the environment; and take away backing and assistance from adversaries. If successful in these efforts, Special Operations Forces (SOF) will gain military, political, and psychological advantages over their opponents. The OHD Concept integrates existing capabilities and disciplines into an updated and comprehensive approach that is applicable to all SOF core activities.

SOF personnel continuously think about human interactions, building trust, and winning support among individuals, groups, and populations. Drawing on the approach and required capabilities identified in this concept, SOF and its partners use persuasion and compulsion to shape the calculations, decision-making, and behavior of relevant actors3 in a manner consistent with mission objectives and the desired state.4 SOF must win support and build strength, before confronting adversaries in battle. Working in collaboration with capable partners and as part of a whole-of-government approach, SOF enables preemptive actions to avert conflicts or keep them from escalating. When necessary, SOF and its partners confront and defeat adversaries, always mindful that the end goal is an eventual cessation of hostilities and a more sustainable peace.

SOF conduct enduring engagement in a variety of strategically important locations with a small-footprint approach that integrates a network of partners. This engagement allows SOF personnel to nurture relationships prior to conflict. Language and cultural expertise are important, but SOF’s ability to shape broader campaigns with allies and partners to promote stability and counter malign influence is vital. SOF leaders plan and execute operations that support national objectives, while providing continuous analysis and advice to ensure effective strategy. SOF must identify and assess relevant actors, understand their past and current decisions and behavior, and anticipate and influence their future choices and actions across the ROMO.

SOF contribute to the accomplishment of U.S. policy objectives during peaceful competition, non-state and hybrid conflicts, and wars among states. The ideas in the OHD Concept are key to confronting state and non-state actors that combine conventional and irregular military force as part of a hybrid approach. Adversary states are increasingly adapting their methods to negate current and future U.S. strengths, relying on non-traditional strategies, including the use of subversion, proxies, and anti- access/area denial (A2/AD) capabilities. These adversary strategies require a refined U.S. approach for effective counteraction. A critical goal will be to create conditions that shape adversary decisions and behavior in a manner that favors U.S. objectives or develops opportunities friendly forces can exploit to achieve the desired state.