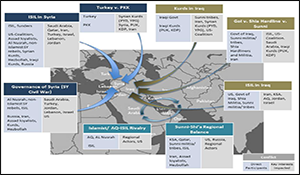 Unpacking the Regional Conflict System surrounding Iraq and Syria—Part I: Characterizing the System.

This is Part I of a larger study exploring the dynamics of the central Middle East conflict system. It describes the system and why it is critical to assess U.S. security interests and activities in the context of the entire system rather than just the conflicts (e.g., defeat of ISIL) in which the U.S. is most interested. Part II describes the analytic approach used to assess regional dynamics and regional futures based on the alignments and conflicts among three critical drivers: actor interests, resources and resolves. Part III illustrates the analytic process applied to 20-plus actor over five of the eight conflicts. The final results are presented in a Power Point briefing.

The nature of “the” conflict, or: Why there are no sides

At the beginning of U.S. involvement in the war against ISIL, many U.S. analysts and planners tended to treat the defeat of ISIL as two issues: defeating ISIL in Syria and defeating ISIL in Iraq. There are good reasons for the initial focus on Iraq, including the more significant U.S. interests, relations and sunk costs. As ISIL’s territorial gains progressed, however, the situation became more commonly viewed as a single, cross-border conflict. The reason the conflict engulfing Syria and Iraq is so difficult to grasp is that what many view as one or two conflicts is in reality a complex web of at least eight distinct militarized disputes happening simultaneously in pretty much the same space.1 While some of the conflicts have overlapping participants, possible outcomes, and similar interests, none of the eight are the same on all counts.

We misdirect ourselves if we insist on looking for a consistent alignment of actors – “sides” – across this complex, overlapping and multi-tiered system. Because the same actor can have different widely interests at stake in different conflicts we cannot assume a priori that co-participants like Hezbollah and the U.S. who share preferences over certain outcomes (e.g., the defeat of ISIL in Syria) in one or more of the conflicts will share objectives in the others. Analysis of the actors interests that shape events in the region shows actors can sometimes agree on which is the worst outcome in a given dispute, while being in serious disagreement over which is the best outcome in that same dispute. For example, in the Syrian Civil War Jaish al Fatah and the Assad regime agree that ISIL should not be allowed to expand the self- proclaimed Caliphate over large areas of Syrian territory; however they disagree intensely over who should govern Syria. The reverse can also be true: Turkey, the U.S. and the non-Islamist Syrian opposition might agree that the best outcome in the Syrian Civil War would be replacing the regime with leaders from the non-Islamist Syrian opposition; because they have different arrays of core interests there is less agreement over whether the worse outcome would be the fall of the regime accompanied by ISIL expansion, or, Assad’s regaining control in Syria.

Why is this important? First, coming to grips with these differences – what we might think of as the limits or tipping points of cooperation between actors – is critical for estimating what other actors may do in response to changing conditions in the region. Second, failure to appreciate and manage the broader context within which our counter-ISIL efforts occur leaves us vulnerable to missteps and strategic surprise simply because we have not considered the impact of our actions beyond the battle against ISIL. In fact, looking more broadly highlights a number of scenarios in which the defeat of ISIL, for example accomplished by further alienating the Sunni minority from any political system in Iraq, or by tipping the balance in Iran-Saudi power politics, would actually do more damage to our counter- terror efforts than not having done so.

The remainder of Part I outlines the core issues for eight militarized disputes in the conflict system. To demonstrate what we may fail to recognize about the broader threats to US interests we consider the impact of the total defeat of ISIL in Syria and Iraq on the regional conflict system.