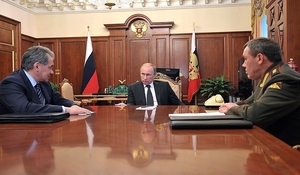 SMA hosted a speaker session presented by Dr. Robert Person (United States Military Academy, West Point) as a part of its Future of Global Competition & Conflict Speaker Series. To begin, Dr. Person established that Russian strategy in the 21st century does not only reflect Russia under Putin’s leadership, but rather it has been influenced by historical Russian strategies and will likely remain similar after Putin. He defined “grand strategy” as the coordinated and comprehensive integration of ways and means to achieve the high-level, national strategic ends. What makes it “grand” is the ends that the strategy is pursuing. Dr. Person then explained that insecurity is the driving motivation of Russia’s worldview. He characterized Russia’s strategic end as “Yalta 2.0” and outlined the three main principles of this strategy: 1) to establish an uncontested, privileged sphere of influence across post-Soviet nations, 2) to secure Russia a decisive seat at the table of great powers in ambiguous regions, and 3) to constrain and contain the United States’ unilateral pursuit of its interests globally. Russia’s evolving grand strategy can also be divided into three time periods: 1) “Pragmatic Accommodation” (2000 – 2003), which involved bargaining, as well as offering support and concessions to the US in order to secure Russian interests; 2) “Soft Balancing” (2003 – 2007), which involved using political and economic means to slow down US ability to pursue its interests; and 3) “Asymmetric Balancing” (2007 – present), which involves using unconventional, asymmetrical means to counter the adversary. An example of asymmetric balancing that Dr. Person provided is Russia’s use of a playbook filled with gray zone tactics, including information and cyber warfare, enlisting non-governmental actors, creating economic pressures, and providing assistance to paramilitary forces. He then explained that Russian asymmetric balancing has been demonstrated through its actions since its use of information warfare in Estonia in 2007, through its meddling in the 2016 US elections. Overall, Russia’s grand strategic ends are enduring, will continue to evolve, and will outlast Putin, according to Dr. Person.